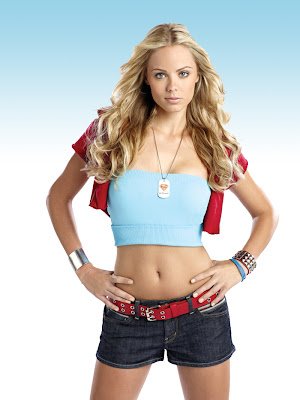 Laura Vandervoort speaks to Wizard about her upcoming role as Kara in "Smallville":

"This version of Kara is based on the new relaunched character—the new Supergirl, who appeared in Superman/Batman and in her new series."

Translation: The producers were given a stack of the "bad girl" Supergirl comics a year or so ago as "research" into what DC was currently doing with her.

"She’s much more edgy and has a lot more attitude and is a lot more rebellious than previous versions."

"She’s technically older than Clark; she was older than him on Krypton and then because of some sort of hyperspace accident arrives on Earth younger."

Translation: It's not really barely legal but it sort of is as well.

When asked about the skimpiness of her outfit, she said:

"Yeah, well, Kara really gets into music and videos and takes her cues from music artists and what she sees on TV, so those are the cues that inform her outfits."

Email ThisBlogThis!Share to TwitterShare to FacebookShare to Pinterest
Labels: supergirl