"Superbad" -- A Chick Flick
If Chicks Were Dudes And Not Chicks 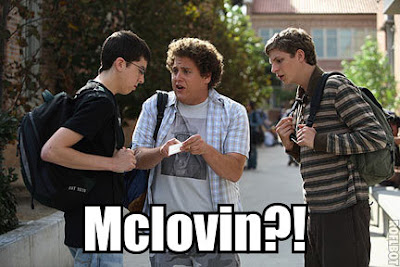 Despite all the requisite "mild" homophobia in these sorts of "dude" flicks, Superbad ends with two men repeatedly saying "I love you." And while during this scene there are the requisite snickers from the audience, the sentiment between those two characters is genuine -- they're best friends and have saved each other too many times to count.

"Superbad" is the male equivalent of a "chick flick" -- it is, at its heart, about male bonding and males discussing male issues with other males. The movie made me laugh, but at times I just couldn't relate, because I do not have a penis to obsessively draw like Seth does in the movie, nor have I ever been in the position to risk my life to obtain alcohol for the girl I want to have sexual intercourse with.

Nor have I ever been used as a human tampon, nor have I've been forced to sing "These Eyes" by a room full of coked up hipsters, nor have I've travelled with a pair of nutty cops reliving their youth and shooting up street signs. Not that I'm saying these three examples are the exclusive purview of the male experience. But they are as funny as hell.

The best part for me about "Superbad" was that I really felt I knew these boys in high-school. These actors, in both looks and demeanor, pull off some of the most realistic portrayals I've seen of teenagers in quite some time. Absent is that slick pseudo-teen quality of John Hughes films and 90s slasher movies. Neither do we have the ultra-quirk of "Napoleon Dynamite" that jettisons its characters into a never-never land of weirdness for the sake of weirdness.

I recommend "Superbad" but since it is a chick flick if chicks were dudes instead of chicks, I warn you that chicks might be offended. But surely all offense can be wiped away by the dewy earnestness of Michael Cera's Bambi-eyes as he holds a condom and lectures Jonah Hill the importance of respecting your partner and always using protection.
Posted by Verge at 10:30 AM

Email ThisBlogThis!Share to TwitterShare to FacebookShare to Pinterest
Labels: Superbad