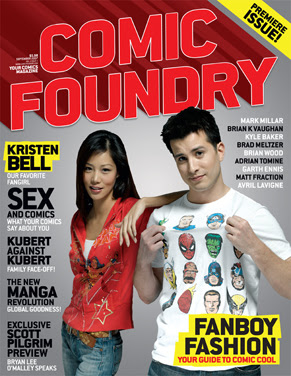 A party celebrating the launch of the comics cuture magazine Comic Foundry was held at the Irish Rogue in NYC last night, and your intrepid reporter/reveller Occasional Superheroine was there.

The vibrating condoms placed in our gift bags drove the point home: Comic Foundry is the magazine for comic book fans who get laid.

I also had a chat with Occasional Superheroine blog regular Red Stapler.

Comic Foundry Editor-in-Chief Tim Leong was of course the vortex of attention at the event, and expressed excitement that Diamond apparently did a reorder on the debut issue of his magazine.

Comic Foundry, originally online, is basically "Details" meets "Wizard Magazine" and is quite cool. It's available NOW at your local comic book store or purchase it online.

As an aside, The Irish Rogue is apparently no stranger to comic book type peoples, as it is rumored that Frank Miller hangs out there and a copy of a Garth Ennis's "Punisher" hardcover sits behind the bar in a glass case.
Posted by Verge at 6:36 AM