In "Valiant" Vs. "Valiant," It's The Fans Who Suffer 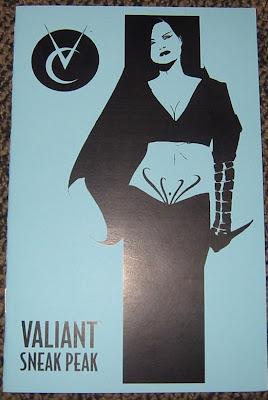 Christ on a cracker -- check out this copyright mess with the Valiant characters.

Apparently during San Diego, at the same time Valiant Entertainment was talking "Harbinger" at the Valiant Fans panel, this ashcan called "Valiant Sneak Peak" was making the rounds at $40 a pop.

"Valiant Sneak Peak" features uncredited revamps of classic and nont-so-classic Valiant/Acclaim characters including a female Ninjak. It was put out by "Valiant Intellectual Properties."

Here at Newsarama you can read all about the arcane legal issues involved. If you can follow it, God bless you. It's all Greek to me, but there is one thing I DO know --

It's the Valiant fans who will get screwed.

Has anybody put out a tell-all bio on Valiant/Acclaim yet? Holy crap, that company has a tortured history. And it was bad enough that Turok, Solar, and Magnus would be forever separated from the bunch for trademark reasons. Now the whole future of the rest of the line is in doubt.

I predict in the future the issue of rights and "breaking up" characters from companies will be more and more in the headlines. We've certainly seen it with Superboy, who DC can no longer use.

Perhaps in the future companies like DC & Marvel will periodically "sell off" characters to make a little extra scratch?

If so, give me Doc Samson. Just because.
Posted by Verge at 3:33 PM