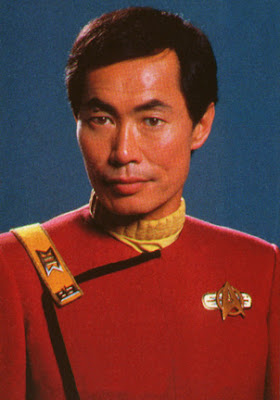 From the press release (on Ain't It Cool News):

GEORGE TAKEI may be playing a hero on HEROES and serving as Howard Stern's recurring sidekick on subscription radio, but it's as the dashing Mr. Sulu, helmsman on the starship Enterprise, that he will be forever loved by the fans.

But he hardly imagined his greatest Sulu episode would come in 2007! Takei is starring in "World Enough and Time," a new STAR TREK episode produced by an amazing mix of Industry pros and fans that will be premiering at the Fine Arts Theater in Beverly Hills on August 23, 2007, with both the premiere and episode streaming real-time worldwide on the Internet – literally a world premiere.

The "webisode," which premieres Aug. 23 at www.startreknewvoyages.com, boasts co-stars like Star Trek alums Majel Barrett and Grace Lee Whitney, and a crew including "Star Wars" & "Star Trek The Next Generation" writers and designers.

But what the release doesn't really make clear is that this is essentially a high-class unauthorized fan-film.

This is pretty interesting. Is Paramount deciding not to take legal action? Could they?

Could fans and industry pros get together and make high-class fan films of cancelled series, even alternate versions of dissatisfying last episodes?

"The Sopranos: Between The Black"
Posted by Verge at 2:47 PM