The One You've Been Waiting For: "Supergirl" #20 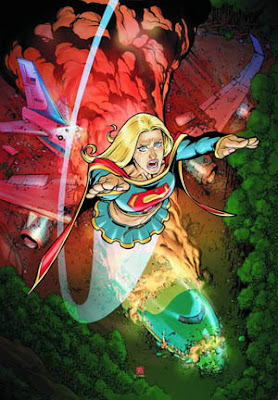 I have been waiting 3 months for the post Kelly-era "Supergirl" to come out. As you might remember, there had been a little, as they say, "kerfluffle" regarding the handling of the Maid of Might -- which possibly resulted in an actual editorial and creative shift for the book.

The Supergirl of the Tony Bedard/Renato Guedes run is real, realistically proportioned, and is drawn so modestly that she actually wears pantaloons under her skirt. I mean, the one or two times you get the crotch/upskirt shots they are completely covered up and unerotic -- my condolences to those who require them.

Renato Guedes is a very talented artist who manages to make Supergirl animated & attractive without being sexy. The irony is, you really get the feeling that, if asked, Guedes could totally "bust out" (if you will excuse the phrase) with the sexiness if asked. The effect is that Supergirl is depicted as a physically maturing yet modest and almost tomboyish female -- there is a constant tension between the burgeoning adult woman's body covered up by the cape and the skirt and the pantaloons and the confused, rebellious, uncertain teenager inside. And I like that tension. That's a realistic depiction for a 17-year-old. It's not cheesy-cheesecake. It's honest.

The story really plunges you into the events of "Amazons Attack" -- which, not being familiar with the "event," necessarily lessens its emotional impact for me. Because of all the action, I haven't really got a feel for what Tony Bedard is going to bring to the table on this book -- so I will give it a few months. The art reminds me very much of Gary Frank, so perhaps Bedard could bring back that magic that made the PAD/Frank run so enjoyable.

What I do pick up, however, at least on a subconscious level, is a sense of Supergirl emerging from the last 19 issues of her book with a bit of bewilderment and shame. You get the feeling that she wants to really prove herself; to redeem herself in some fashion.

Mention should also be made of Bernard Chang's cover, which similarly presents a pretty but non-exploitative Supergirl.

The book is, actually, so much a reaction to the fury over the "teen hottie" Kara as to make my head spin. I have never seen such a complete and total change in a character based on reader outrage. It's a welcome change. It's a book that I could give to an adolescent girl without the slightest bit of reservation or embarrassment.

I give "Supergirl" #20 the official "Occasional Superheroine" stamp of approval.
Posted by Verge at 1:06 PM

Email ThisBlogThis!Share to TwitterShare to FacebookShare to Pinterest
Labels: supergirl