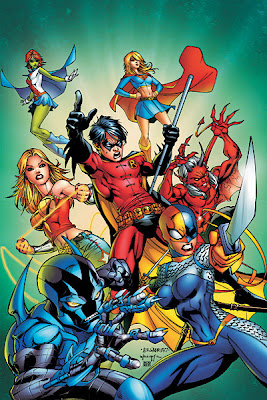 I think having flashbacks (complete with the original writers & artists) of previous incarnations of the same team within a relaunch of said team is only a good idea if the relaunch is awesome. Otherwise there is suffering by comparison.

Every time I read a flashback in "Teen Titans #50 -- whether it was Wolfman/Perez, Dezago/Nauck, or even Johns/McKone -- I tilted my head slightly and said: "awww, remember that?"

The nostalgia floods in, you know?

But these flashbacks only highlight the fact that this current "Titans" is so darned generic.

I really wouldn't blame new writer Sean McKeever, because basically he's been given a "bridge" issue (with a patchwork of artists) that unfortunately has to serve largely as exposition. Analogous to this issue would be "All-Star Flash" #1. You really can't tell a lot about the new direction of "Teen Titans" this way -- though for a high-profile "anniversary" issue you really should.

But the art of series regular Ale Garza (who drew the cover) and fill-in artist Randy Green (who drew all the "current" Titans pages in this issue) don't really have a "look" per se. There is no "signature style" to which I can feel connected.

For example, take the work of Jamal Igle in "Firestorm." I realize "Firestorm" had a short lifespan as a comic. But I collected a run from that book based in part that Igle's art had a distinctive "look" that I got attached to.

This current "Titans" look is, if anything, the sort of generic videogamey pseudo-manga art style that dominated the books of both DC and Marvel in the late 90s/early 00s.

Now, maybe I'm just getting old and this is the sort of hip "with it" art that all the cool kids are digging nowadays. I'm sure as hell open to this possibility. But only the sales will tell the tale.

McKeever can still provide kickass stories that will reel in readers like me despite the art. But in order for that to happen, he has to be unencumbered by the baggage of a lot of previous DC events & crossovers.

Yes, Bart is dead. Okay. I get it. I feel bad. Yes, I know Robin feels bad. I know Bart was a loveable scamp who always got into mischief. I read those same "Flash" issues too. I know.

Reading those Johns/McKone pages in this issue reminded me how redundant it was to have Bart as Kid Flash & Changeling in the same comic. Several years ago when Teen Titans Go came out I though Kid Flash's days were already numbered because the show decided to go with Changeling instead.

And the sequence where Raven & Starfire reminisce about Bart trying to see them naked was kinda...meh. Do I need to know this about Bart? Is a teammate trying to violate the privacy of his female "co-workers" in any way endearing? What, "boys will be boys?"

Anyway, I will give "Teen Titans" another shot next month to really see where it is going.
Posted by Verge at 12:10 PM