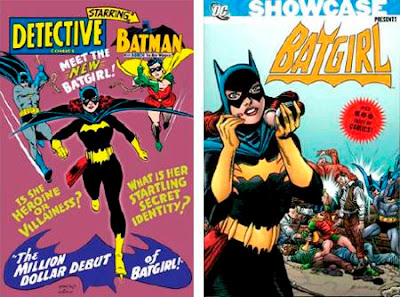 There has been a lot of controversy surrounding the cover to "Showcase Presents: Batgirl" Vol. 1, which depicts a clueless Batgirl applying lipstick while her costumed comrades have to pick up the slack. Critics of the cover say it is a sexist illustration, while its defenders make the argument that the cover accurately depicts the Batgirl of the 60s & 70s.

I'm actually reading these stories straight through, and I thought it would be interesting to share my notes.

Story #1:
Detective Comics #359, "The Million Dollar Debut of Batgirl!"
Writer: Gardner Fox
Penciller: Carmine Infantino
Inker: Sid Greene
Plot: Librarian Barbara Gordon uses the "Batgirl" outfit she made for the Policeman's Ball to save Bruce Wayne from the clutches of Killer Moth.
Notes:
This issue has been reprinted so many times that it's hard to look at it with a fresh pair of eyes. But I must say that I'm impressed that what is essentially a quickie introduction to a character invented for the then-current television series is as good as it is.

An important thing here is to note Barbara's motivation for becoming Batgirl. She initially sews the costume to make a big splash at the Policeman's Ball -- to bust out of her "humdrum" existence as a librarian and express the adventurous personality that has been lying right under the surface.

Her motivation to spring into action as a crimefighter, however, comes from an instinctive response to the viewing of a crime -- in this case, the kidnapping of Bruce Wayne.

Batgirl does not become a hero out of a need for revenge for a past injustice done on herself. Neither does any amorous intentions towards one man or another factor in.

Far from Batgirl being the cheap, throwaway gimmick of the "female counterpart of the Superhero," Gardner Fox seems to be hammering the point home that this is one accomplished young woman. It is light-years away from the portrayal of the "original" Batgirl, Betty Kane, who spent as much or more time wooing Robin as fighting crime.

In a word, the Batgirl of Detective Comics #359 seems modern. 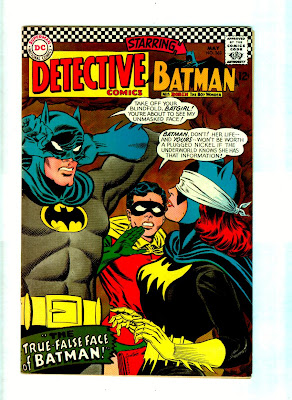 Detective Comics #363, "The True False-Face Of Batman"
Writer: Gardner Fox
Penciller: Carmine Infantino
Inker: Sid Greene
Plot: Batman and Robin enlist the help of Batgirl to catch the criminal mastermind "Mr. Brains."
Notes:
The plot regarding Mr. Brains and his use of the unsuspecting Gotham Public Library System is really secondary to the theme of trust and distrust between the Dynamic Duo and Batgirl.

It is in this story that the Batman & Robin/Batgirl alliance begins to officially form. And what a convoluted start! Batgirl is taken to the Batcave to help on the case but must be blindfolded as to not learn Batman's secret identity.

But then Batman invites Batgirl into a game of "an identity for an identity" -- unmasking himself as Bruce Wayne much to Robin's horror! It is made clear that the Dynamic Duo don't quite trust Batgirl yet nor consider her an "official" member of their team.

However, the clay on Bruce's face tips Batgirl off that he couldn't possibly be Bruce Wayne but must be someone else using a disguise to trick her.

It is later revealed that Batman carefully planned the whole complicated thing as a means to capture Mr. Brains. But the subtext of the blindfolding/masks/masks-on-masks/and the careful withholding of information points to the underlying initial tension between Batman and his unplanned female counterpart.

"If Batman had really wanted to take me into his complete confidence, he'd never have blindfolded me to and from the Batcave!"

True. It will be some time before the three costumed crimefighters begin to share the camaraderie and trust that their alliance will be known for. 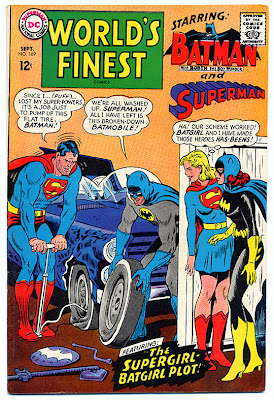 World's Finest Comics #169, "The Supergirl-Batgirl Plot"
Writer: Cary Bates
Penciller: Curt Swan
Inker: George Klein
Plot: Supergirl & Batgirl seem to be inexplicably targeting Superman & Batman and destroying their lives.
Notes:
Oy. Where to begin? "The Supergirl-Batgirl Plot" is in sharp contrast to the Gardner Fox stories that were running in "Detective Comics," belonging instead to the essentially screwball bizarre tales that were the hallmark of "World's Finest" at that time.

A characteristic of many of the stories in both "World's Finest" and the other Superman titles of this time was paranoia surrounding the intentions of women. Many stories focused on Lois Lane hatching one hair-brained (and often frankly selfish) scheme to either find out Superman's identity and/or make him marry her -- making the reporter second only to Lex Luthor himself in terms of a formidable adversary.

In this story Batgirl & Supergirl repeatedly perform one sabotage after another to Batman & Superman, reducing the powerful heroes to being stranded at the side of the road and changing a busted tire.

Why are they doing this?! Why have their powers disappeared?!

"I wonder where those conniving females are?" Superman says.

In the end the status-quo is restored not just by the return of Superman & Batman to their former glory, but in the absolution of the superheroines from any wrongdoing. It wasn't Supergirl & Batgirl at all -- but Black Flame (villainess from Kandor) and Catwoman! And wait -- it's not even Black Flame & Catwoman -- it's Mxyzptlk & Batmite! Oh, dear.

But regardless of the "imaginary" quality of the threat, the subtext is clear -- Batgirl & Supergirl could be pretty dangerous if they put their mind to it. Better keep an eye on them. 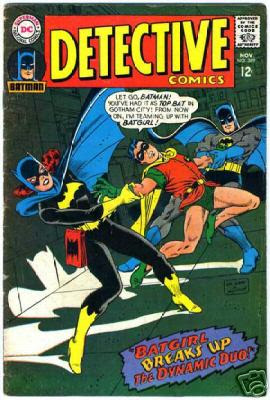 Detective Comics #369, "Batgirl Breaks Up The Dynamic Duo"
Writer: Gardner Fox
Penciller: Carmine Infantino
Inker: Sid Greene
Plot: Robin must pretend to reject Batman for Batgirl in order to save him when he is infected with swamp fever.
Notes:
This is a fairly cartoony and screwball story in comparison with Fox's earlier Batgirl offerings in "Detective Comics." It also bizarrely reads as the analogue to the Lois Lane "jealousy" stories where she is agonizing over Superman's attraction to one "other woman" or another -- only this time it is Batman jealous over Robin's attention to Batgirl.

The subtext once again rears its head -- Batgirl is not to be trusted, and the addition of a superheroine to Batman's little world can only cause more problems.

Of course, Robin's defection to Batgirl's team is only part of Batgirl's plan to save Batman from the "swamp fever" he has contracted. But the Caped Crusader is inconsolable at the loss of his sidekick:

"How could Robin do this to me? What's he thinking of -- exchanging me for Batgirl?"

In another scene, Batgirl & Batman fight over Robin in a literal tug-of-war. It can very obviously be interpreted as a lover's triangle -- though I see it much more as the jealousy & dismay a teenage boy might feel when his best friend ditches him for girls. Consequently, there is a very juvenile feel to the conflict in this story.

In all three Gardner Fox "Detective" stories, Batgirl/Barbara Gordon plays a key role in solving the crime/saving the day. She is take-charge, competent -- and apparently unconcerned with romance. This last factor will be explored more in-depth in the next story I will look at, "Batman" #197's "Catwoman Sets Her Claws On Batman" -- and undermined in the wretched "Brave and the Bold" #78's "The Coils of Copperhead."

Email ThisBlogThis!Share to TwitterShare to FacebookShare to Pinterest
Labels: batgirl, women in comics