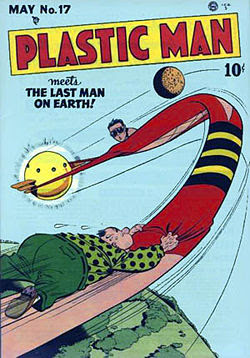 The Absorbascon makes the case for returning to Plastic Man's more "serious" roots.

By "serious" the blog doesn't mean grim and gritty, but simply taking the joke-a-minute slaphappiness out of the character. For two reasons:

1) It would go back to Plas's Golden Age roots, where he was a serious superhero a la Superman who played straight man to his slaphappy jokester sidekick Woozy Winks.

2) The excessive wackiness of Plastic Man as of the last ten years or so serves to take the reader out of the story and underlines that nothing in the story really matters:

"As soon as Plastic Man appears, you are are reminded through his commentary that, ehn, it's just a comic, there's nothing really at stake, don't take anything that happens to heart as significant."

Sure, a lot of this characterization was done to replace fellow jokey-jokester Elongated Man's absence from the team. In fact, one of the deciding factors in singling out E.M. in "Identity Crisis" was that DC had Plastic Man and really didn't need two stretchy heroes anyway.

But I think seeing Plas and E.M. as interchangable really does a disservice to both characters.

I did enjoy the Kyle Baker series, though, and I think it played more closely to the original Golden Age version.

Anyway, it might be an interesting take on the character to try playing him "straight" once again.

Of course, this is the version of Plas I remember best: