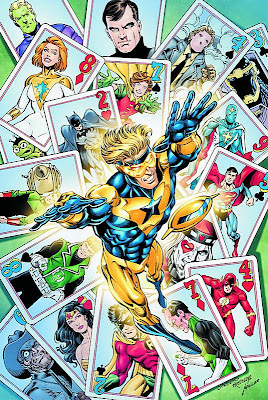 When I say old skool, I mean "circa 1991." Which is not necessarily a bad thing, because the late 80s/early 90s had a bunch of good DC books, books that were more story oriented than art oriented.

Which is not to say Dan Jurgens's art is in any way "bad" -- but it is a very straightforward look that contrasts sharply with the more stylized pencils out there. It's Grummett, Ordway, Tom Smith, Paul Ryan, etc -- and it is also very Valiant Comics as well.

The story is engaging enough, though falls a little into the "need a DC Wiki to follow along" (Chris, I'm borrowing that line from you, hope you don't mind).

Basically, Booster Gold is given a task from "Rip Hunter" to fix all the wormholes left behind when Mr. Mind ate parts of time and "the boy formerly known as Super" punched a hole in history.

The catch is that Booster must never be considered a hero for doing this by the Public At Large, or else Teh Bad Guys will track him down thru time and kill him.

So Booster must be perceived as an Infinite Dumbass throughout the time spectrum.

With so much emphasis given to the Ted Kord Blue Beetle and other late, great versions of your favorite DC characters, I would say that the days of the "reboots" (with the probable exception of The Question/Renee Montoya) are numbered.

Which is teh sucky for teh comix stores in NYC, because they just can't get rid of those new "Firestorm" figures.

Trivia Time!
The solicited cover for Booster Gold #1 features a "Carrie" Robin from Miller's "Dark Knight"... but the printed cover switches out that for an image of The Question.
Posted by Verge at 9:24 PM