Fangirl Fridays: Where Is DC's Matt Fraction? (And Other Questions) 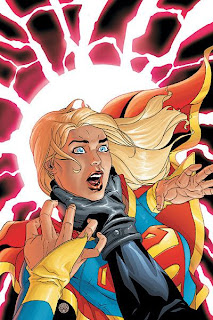 " I actually had a different approach to the character. I had an opening four-issue arc that was very, very different that I was going to do, and I took way too long to come up with it. I was right on time getting it in before my first issue deadline -- and of course I didn't tell anyone what I was going to do. [Laughs] Then I turned it in and found out that there was a very specific continuity problem with the core aspect of what I was going to do, and so I had to start over and go really, really fast to come up with something for the first issue. So I'm not where I should be with the character and what I want to do with her. "
--Kelley Puckett on his current run on Supergirl

The question popped into my mind as I entered the comic store the other day:

"Who is DC's Matt Fraction?"

Matt Fraction is of course the writer on The Punisher, Iron Fist, etc., the originator of the "kicksplode" school of comic writing. His style is very distinct and he is, what they refer to in the current nomenclature, as a "hot young writer" [Fat Cobra = Character of the Year!].

Marvel seems to be developing a whole stable of these new voices, it seems, not content to merely rest on the laurels of Bendis and Brubaker. Here are a few names just off the top of my head: Matt Guggenheim, Greg Pak, Brian Reed, Dan Slott, Daniel Way, Jason Aaron. The actual list is far longer than this.

On the other hand, DC's writing lineup hasn't really changed all that much in the last 5 years. Grant Morrison is still the guy All Hopes Are Hung Upon. Geoff Johns and Keith Giffen are still the emblematic DC writers. Judd Winick is still the guy nobody understands why he is still writing these books but somehow he is.

Around the time Countdown launched, DC seemed to have an influx of new writers, and the anticipation was great. Tony Bedard, Sean McKeever, Dwayne McDuffie. And yet, what has happened?

Bedard gets caught in a (to my mind) a particularly cruel game of "writer musical chairs." I haven't been able to read a long enough run of his DC work to formulate an opinion of it.

McKeever & McDuffie get their debuts tangled in the editorially-driven clusterf**k.

Veteran writers like Tom Peyer, Kelly Puckett, and Chuck Dixon are without warning suddenly plopped into existing titles, forcing them to hastily come up with a new storyline and direction. Bedard is now added to that mix with Birds of Prey.

A great writer like Will Pfeiffer gets crucified by readers for a miniseries that was largely out of his control, a slave to editorial dictates.

Mark Waid & Greg Rucka are for the moment out of the picture.

Pete Tomasi might be considered as part of the mix of DC's hot new crop of writers, but frankly the fact that he was so very recently an editor there and now suddenly has two high-profile titles makes it slightly harder for him to prove himself. Personally, I have not read enough of Nightwing to make a determination one way or the other.

Gail Simone is the great writer who has proven herself for years -- but if her current run on Wonder Woman doesn't do fabulous, DC will use her as an internal example of why "woman books don't sell, and women writers don't sell" (I've heard this argument before).

And then there is DC's most high-profile writer of all: DCU Editorial.

Case in point: Countdown, which reads like it was put together by robots, by the same manatees that write Family Guy. No humans actually wrote that series. It was just a bunch of post-it notes strung together. That series was written by overworked, jaded editors, not Paul Dini, McKeever, Bedard, et al.

So what is DC's game plan in terms of writers? Can it be that all the DCU books are lame ducks anyway because Final Crisis will change everything? Should I even bother buying another DCU book until that time?

If I was sitting in the DC executive seat (sometime around when pigs fly and that The Dark Knight Heath Ledger talking doll with a pull-string comes out), I'd probably look to get Brian Michael Bendis & JM Straczynski . I have no inside information on that, I'm just trending this out.

And if I was at Marvel, I'd find a way to complete my collection of the best and brightest and look up whatever young DC talent is left. Including Brian Wood, who would be the biggest prize of all. Again -- no inside information, I'm just trending this out. I'd also find a way to get Neil Gaiman doing more projects. Call it the Morrison Vs. Gaiman free-for-all.

That said, 2008, in my estimation, will be interesting. Because whatever the situation at DC, if it doesn't improve it will change. And for Vertigo this goes triple (tho Will Dennis on the whole seems like a good developer of new, "kicksplody" books).

The answer to a lot of these woes is to get editorial staff who can seek out aggressively new talent. And retain them. The best they have right now is Mike Marts. He was the result of a strategic investment on DC's part, poached from Marvel. And Joey Cavalieri is like their quiet talent hunter, especially for indy talent, though I don't think he gets the recognition for it that he deserves.

That "strategic investment" aspect should drive everything DCU does from this point forward. This industry is entirely too competitive to do otherwise. There is a whole wide world of talent out there. And there is talent under their own banner that have been mishandled.

Anyway, those were just some things that popped into my head as I was buying comics the other day. Have a great weekend!