Faux Pas At The Comic Shop 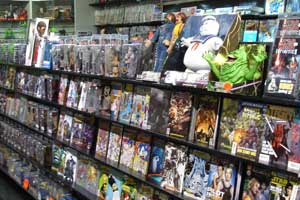 So I headed down to the comic shop for New Comic Day (so not Free Comic Day) and while I was browsing, about a pile of 30 Buffy comics fell from the top shelf on my head. And you know, the area is crowded enough as it is with all the customers, and the floor is now covered in smushed copies of BTVS.

"I didn't do it!" I insisted. Which was true, I didn't even bump it. I was looking at "Countdown" instead, I swear it.

Mad scramble by everyone to pick up the copies. People are stepping on them.

I don't usually buy Dark Horse's Buffy, but I (the superstitious) bought one last night.

And in case you were wondering, Dawn is still a giantess. (Always found that plot a little corny, but...)

BTW, Tom Beland's True Story Swear to God #10 was sold out, after a 15-minute search throughout the store to locate it.

And I bought my sweetie the Bucky action figure, because that's how I roll. Even though in my opinion the figure looks a little dorky -- tiny head, big ears.
Posted by Verge at 3:00 PM