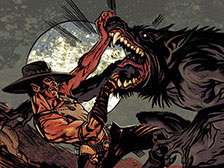 10. The Howling: This werewolf movie combines bloody lycanthropic goodness with a lampoon of the burgeoning "self-actualization" movement of the late 70s and early 80s. The transformation at the end looks more like a puppy than a werewolf, however.

9. Teen Wolf: This flick really ain't half-bad, and fits right in with other silly teen comedies of the era. I mean, Michael J. Fox's Wolf Man makeup is atrocious and looks like Jo-Jo The Dog Boy. But still...

7. Curse of The Werewolf: This classic Hammer Studios film stars a young Oliver Reed tearing up the scenery and acting like a wild beast. And you should see how he acts after he transforms!


6. Cursed: An underrated Wes Craven film with a guest-appearance by Scott Baio as himself. What could be scarier than that?

5. Underworld: I'm not sure who Scott Speedman is, I just want him in more movies with his shirt off.

4. Werewolf Women Of The SS: Who can forget that classic grindhouse movie with Nicholas Cage as Fu Manchu? (NSFW)

3. An American Werewolf In London: This is like the TV show "Chuck" with lycanthropy, a living corpse, and a downer ending.

2. Ginger Snaps: One of the finest woman-centered horror movies, period. Also, a movie about periods


1. The Wolf Man: This 1940s movie still holds up today as one of the best werewolf movies ever made. Larry Talbot IS "Poor Bastard."

All of this, of course, is not a shameless promotion for the premiere werewolf entertainment in comics: 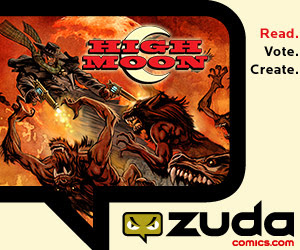