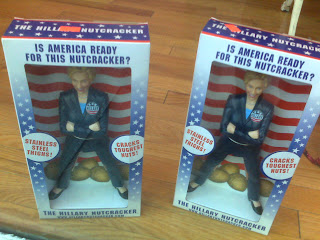 I just discovered these unique items at a local store and had to take a picture.

They are Hillary Clinton "nutcrackers". In case you can't tell by the photo, you crack the nut between her legs.

This brought to my mind the bigger issue of how women in power are sometimes perceived or equated with the idea of shrill harpies or, in the example above, "nutcrackers."

Implied in the novelty nutcracker is the idea that Hillary Clinton is specifically targeting men to oppress them in some way, or at least piss them off.

Now, as I've made clear in an earlier post, I'm an Obama fan. But, I've seen nothing of Hillary Clinton that has led me to believe that she is a man-hater.

Why do women in power like Hillary get equated with man-haters?

In her case, part of that may be because warmth and bubbliness does not seem to be her first language.

But how many men in power lack warmth and bubbliness and nobody says "boo" about it?

Personally, I think it is easier for a woman in power to be liked if they do generate that warm quality. But they shouldn't have to, the same way men don't have to. If you can do the job, you can do the job. It's just when a woman is a no-nonsense, uncompromising leader, it's considered "threatening."

It doesn't mean she hates men. And the fact that there are products like this novelty nutcracker in America depresses me.

At any rate, you can bet your bottom dollar that I won't be buying the Hillary Nutcracker. Or the Bill salad-tosser either.
Posted by Verge at 8:00 PM