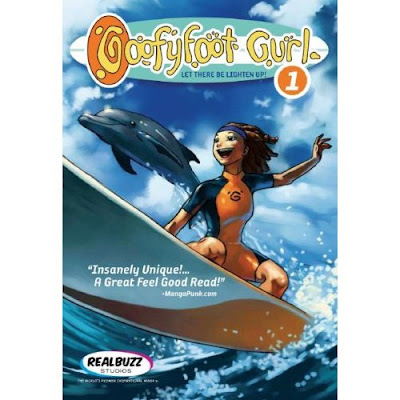 "I write clean but not stupid"
-- Goofyfoot Gurl's Allison Barrows

I thought for this installment of Manga Mondays I'd put the spotlight on one of the more unique forms of manga that is out there: Christian Manga

Realbuzz Studios calls itself "The World's Premier Inspirational Manga" publisher, and their manga is distributed by Thomas Nelson, one of the biggest names in Christian books. Despite its connection with Nelson, Realbuzz's GOOFYFOOT GURL is pretty light in preaching, choosing to focus more on relationships. And just so it's really clear right off the bat that GOOFYFOOT GURL is not exclusively for Christian audiences, it is established at the beginning of the first volume that the Gidget-like main character, Suki, speaks Yiddish.

That said, GOOFYFOOT is a surfing soap-opera like The OC but with a 7th Heaven vibe. There's no sex, but a bunch of surprisingly nuanced and mature relationship issues and generalized teen angst. The storylines interconnect really well and the diverse cast of characters, as written by Allison Barrows (famous for her PreTeena comic strip), act believably. As Barrows commented regarding GOOFYFOOT GURL on a cartoonists' forum, "I write clean but not stupid."

The true showstopper of the book, however, is the stunning art by Tony Weinstock. Weinstock totally nails the manga "feel" while at the same time giving it an unique, painterly quality. Think manga rendered in pastels. And I guess my fear is that readers, put off by their preconceptions of what Christian manga might be, won't give this book a chance and see what tremendously beautiful and innovative work Weinstock has done here.

GOOFYFOOT GURL is a great read for a teenage girl, with all the appropriate elements of fun and melodrama. For both young and older readers, however, I think the luminescent art is a feast for the eyes and expands the boundaries of what manga can do.
Posted by Verge at 5:00 PM