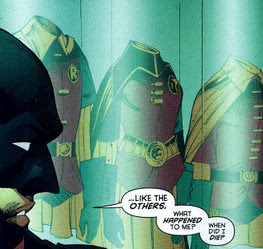 Okay, I know everyone's talking about the (sort of) cameo a certain Robin-suit made in the latest issue of Batman.

But is this indeed a victory for Stephanie Brown/Spoiler/Girl-Wonder supporters? Or, because it's really a dream sequence, is it just much ado over nothing?

Here's why I think it is all damn significant:

1. Grant Morrison wrote it (as opposed to expendable young writer #5).

2. Regardless of the fact that it was a dream sequence, it shows what Batman really felt, if only too stubborn to admit it.

3. Regardless of the fact that it was a dream sequence, it shows what DC probably recognized as a mistake about at least a year ago, if only too stubborn to admit it.

4. Batman gets menaced by a power-drill at the end of the issue, just like what happened to Stephanie Brown -- indicating that the trophy-case/Stephanie thing wasn't just a cheap gimmick, but part of the texture of the story

5. It's damn hard to get DC to admit they were wrong on anything, so I have to consider this a major victory on the part of Girl-Wonder.org.

That said, a possible return of Spoiler in Robin kind of waters down the emotional impact a bit.

But folks, with Batman #673 we might just be seeing the beginning of the end of DC-dickery.

Post-Script: I wrote this before reading Dirk Deppey's scorching commentary on the topic this morning...
Posted by Verge at 1:00 PM