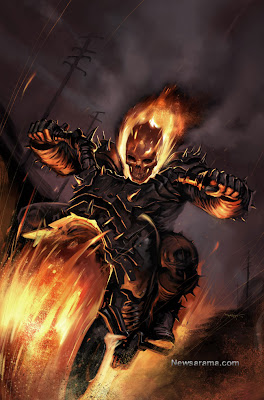 I consider Jason Aaron on GHOST RIDER to be very significant. GHOST RIDER #20 was the first Marvel comic I read in a long time that I could say felt truly like a Vertigo title. It took what was a quintessential Marvel character and successfully gave it a Vertigo sheen.

To be fair, this feat was pulled off with ample assistance by artist Roland Boschi, whose art style looks like the love-child of John Romita Jr. and Eduardo Risso, and the moody palette of Dan Brown.

I remember reading a Marvel MAX giveaway comic some months ago that provided previews of their upcoming publishing schedule. This included books like FOOLKILLER, PUNISHER, and DEAD OF NIGHT. It was clear to me then that there was some sort of concerted effort to give this line a more "Vertigo Classic" focus. While GHOST RIDER is not a MAX title, I would fit the effort within the same publishing plan.

Part of this Vertigoization is in the lack of tie-ins to the current continuity; no crossovers with Spider-Man, no Wolverine. GHOST RIDER #20, dealing with the ramifications of the character's discovery that he is an "angel," is very much in its own contained world. In such a world containing heavenly creatures that might very well be evil, killer nurses, and the usual sort of semi-zombie backwater folk that pounce on unwary tourists, the mention of "who's the Skrull?" would seem rather gauche. 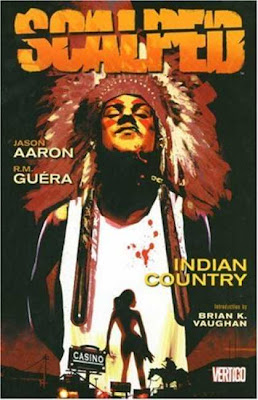 Looking back to the first collected volume of Aaron's breakout hit SCALPED, we get a gritty crime drama which I would hate to peg as "The Sopranos On An Indian Reservation," but I think I'm going to have to. The gripping story revolves around three central characters: Prodigal son Dashiell Bad Horse, his activist mom Gina, and Tribal Leader/crime boss Lincoln Red Crow. The story is relentlessly violent and sordid, with just the right amount of poetic moments to let the narrative breathe.

A word about the oft-lamented "Vertigo Brown" color treatment that has afflicted many of their titles: it might look good on the computer screen or high-grade paper. But on the cheaper newsprinty paper used for the Vertigo trades, the color turns into muddy soup. Something to keep in mind.

As for writer Aaron's claim on a message board that he would refund anybody who bought the first SCALPED trade and didn't like it, I would have to say that the book is at least worth the $9.99 cover price. It is, as they say, Quality.

Looking at the big picture as it pertains to a possible Vertigoization of certain Marvel titles -- I am all for it. There is no reason why GHOST RIDER cannot be as good a book as PREACHER. There is no reason for titles like THE PUNISHER not to be in perpetual trade-paperback heaven, forever young in backlist. But this will mean, as in the case of actual classic Vertigo, a minimum of forced crossovers with Marvel U proper. Spider-Man's striped pajamas are an incongruent spectre in such a universe, except for the occasional Irony issue.

As for Jason Aaron's exclusive with Marvel -- how did DC let this one go? Did they even make an attempt to offer him a mainstream DCU title on GHOST RIDER's level? Or is it, as in the case of Dan Slott several years ago, DC not thinking outside the box enough to visualize what heights these unique voices might reach?
Posted by Verge at 7:00 PM