First, the latest Marvel skrull promo to make its way into my inbox: 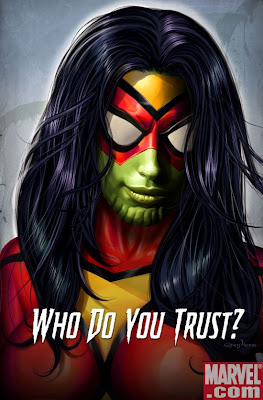 Perhaps to make up for the lack of Marvel info at WonderCon, Marvel conducted an impromptu press call yesterday to announce a bunch of news:

* The upcoming Cable series will be a "sci-fi spaghetti western" and definitely takes place in the current X-men continuity.
Cable really isn't the big mega-star he used to be, is he? I mean, I remember when he was like in the top 5 Marvel superheroes. Maybe that will change?

*Garth Ennis will be making his final Punisher arc, and Tim Bradstreet will depart with him.
Will certainly be the end of an era, but maybe it's time for new blood on the title, so to speak. Jason Aaron?

* The Hulk is definitely not coming back to The Incredible Herc book. Fate of puppy still up in air.
Good, I like that it's Herc's book. Killing the puppy is just mean tho.

* Fantastic Four with Bryan Hitch is penciled through #562, and will (gasp!) come out on schedule.
Must have had him working on this book way in advance. Which is how DC got Jim Lee's "Batman: Hush" out on time. Maybe there is a lesson in this for editors.

* Apparently the cover of Guardians Of The Galaxy #2 is so controversial it can only be spoke of in whispers.
Maybe it's a shot of Vance Astro with a really big package. Painted by Alex Ross.

* Matt Fraction's Invincible Iron Man will have "more variant covers than you can shake a stick at."
Oh boy I hope some have holograms.

* The next Dan Slott Spider-Man arc in May will have...

*Hulk #4 is apparently some really big patooties -- with the shocking reappearance of an old character and a supposedly awesome battle.
As long as Jeph Loeb stops doing those scenes where everything looks normal and then you turn the page and the Hulk jumps out of nowhere. That works on film, not so much in comics (especially if you have to turn the page).

And the latest rumor on teh internets is that Amadeus Cho is really Red Hulk -- what do you think? I thought it was Doc Samson.

Oh, and I saw those "Invaders" preview pages with Cap and the rest -- it's like the same creative team as Project Superpowers (crossover?). Nice stuff.

And I've been hearing some faint rumblings about events in Skrull Invasion...all I have to say is, if those rumors are true, "oh my God." And that's all I'm going to say. Wow. A lot of people will be writing in their blogs.

I'm done writing in this one -- for this post at least!

(Howard the Duck is really a Skrull -- that would explain how he looked in his last miniseries)
Posted by Verge at 6:00 PM