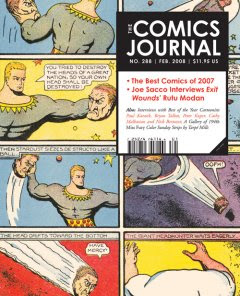 I used to read The Comics Journal when I was 13 years old. I'm not sure if I was supposed to do that. I don't even remember how I got my hands on a copy. Don't tell anyone.

By the time I was 16, I learned that a comic book's real worth was its investment value, and that The Comics Journal was stupid because it didn't have enough Marvel & DC. This opinion waned a bit when I was in college, as the articles in said publication fulfilled my required academic reading for my self-made pop-culture interdisciplinary concentration (read: studies that enriched my life but would never get me a six-figure income, and barely a five-figure income).

When I started working for the comic book industry, I regained the opinion that The Comics Journal was stupid because it didn't have enough Marvel & DC, and too many foreign people to boot. At that time, we were all metaphorically trying to get into Wizard's pants, anyway.

The boom in comic blogging brought the idea of comics journalism/studies back in my mind. And while there was a number of really great blogs analyzing comics, I did miss the feel of an actual document in my hands filled with vetted articles of academic import. Of course, the argument can be made that the print magazine is a dinosaur and that Fantagraphics Press would be better off putting the whole Comics Journal shebang online. But, if we buy that argument then I think the fate of the actual comics themselves are fast behind on the queue.

I don't drop $11.95 on a magazine lightly. But, when I saw that The Comics Journal was in a brand new format as of issue #288 -- and offered a collection of full-color Miss Fury strips to boot -- I decided to give it a shot.

It's a strikingly handsome volume -- its smaller, chunkier feel and arty cover design removing it somewhat from periodical-land, and something more along the lines of Fantagraphic Press's non-journalistic offerings. I think this is a smart move on their part. If the print magazine industry is waning, I think the key would be to make your magazine more like a book, or a hybrid of articles and original/reprint content. 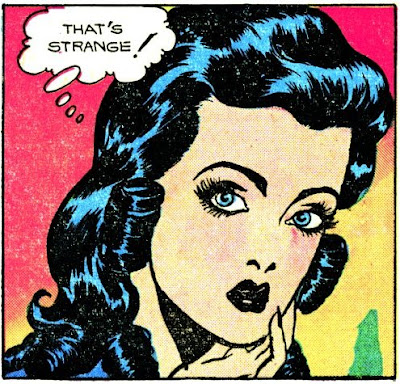 The issue boasts, among other things:
* A list of their top picks for 2007. (happy/surprised to see World War Hulk on the list)
* The aforementioned Miss Fury reprints, with an introduction by Trina Robbins
* An essay on Stan Lee
* A feature on Fletcher Hanks's Stardust
* An interview with Exit Wounds' Rutu Modan
Plus a lot more.

While there are some areas in which the Web trumps print -- for instance, the news reports section in the print TCJ gets scooped by their own Journalista every weekday -- the book/magazine format is still ideal for consuming longer-form pieces.

If The Comics Journal sticks with the new design/format (and perhaps continues the reprints), I'll stick with it.

PS: Don't pull the sticker off the cover. Just leave it alone.
Posted by Verge at 8:37 PM

Email ThisBlogThis!Share to TwitterShare to FacebookShare to Pinterest
Labels: The Comics Journal