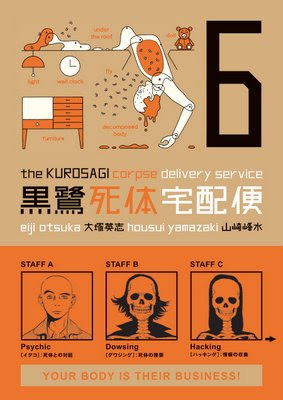 I can honestly recommend Dark Horse's THE KUROSAGI CORPSE DELIVERY SERVICE to any mainstream comic book reader who knows nothing about manga. It's paced like a TV show (think "Psych" or "Pushing Daisies"), has separate "episodes" that have a beginning, middle, and end, and contain elements of comedy, mystery, and horror that have a universal appeal. And for $10.95 you get the equivalent of about 5 comic books with consistent art. Not bad.

Add to this Dark Horse's unique packaging design and 17 pages of notes illuminating the reader on aspects of Japanese culture and manga conventions contained in the material. These are handsome volumes that really stand out on the comic rack or manga shelf.

The plot of KUROSAGI revolves around a team of ne'er do wells with various skills (embalming, mediumship, puppetry) who make a living retrieving bodies in various states of decomposition and delivering them. In volume 6, the team faces off against the post office (who, falling on hard times, have also taken to corpse delivery) and gets another body psychoanalyzed. The last arc, taking place in the late 1800s/early 1900s, is a change of pace and concerns Jack the Ripper.

It is that final story in KUROSAGI, "The Kunio Matsuoka Demon Hunting Side Story," that was of particular interest to me, as I had just read it after Marvel's THE IMMORTAL IRON FIST: ORSON RANDALL AND THE GREEN MIST OF DEATH. The tone and narrative technique of both stories were quite similar...which made me think:

Oh, so there might be a touch of manga influence in some of the most popular Western mainstream comics today -- one not even about the art style, but about the storytelling itself! I'm sure it is old news to those reading who are familiar with both genres -- but as you know, I am only a beginner.
Posted by Verge at 2:12 PM