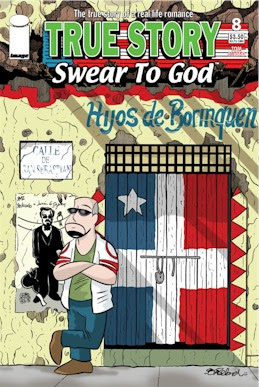 Fave character: Spidey, baby, it's all about the Spidey

First comic you ever read: Amazing Spider-Man #114 "BIRTH OF THE GIBBON." It had Kraven the Hunter and the Gibbon... who, as God as my witness, will make cool someday. Shut up. I'm serious. The Gibbon will rock this universe when I... nawww nawww.... you'll have to wait.

Your favorite comic book "memory": Reading them with my father. Comics still give me that feeling. I'd read my stack I got from the "Hey Kids... COMICS!" rack at the drug store down the street and he'd pick one up and read it as I read mine. Not a word would be said and it's go on for hours. It's one of those moments that stay in you for life. Like unwrapping a Christmas tree ornament that you've had for most of your life.

Most frustrating comic book "moment": I remember the first "WTF??" moment came when Gwen Stacy was killed. I was so in love with Gwen Stacy... I mean... really. So then she gets killed and I'm FREAKING. OUT. During dinner, I'm so fucked up, that I start crying at the table. My mom asks what's wrong and I quietly say "Gwen Stacy died today."

My parents assumed I was talking about a classmate, so my mom asks what happened to Gwen Stacy.

"She was thrown off the bridge and her neck snapped." I ball. Crying a bit more.

"THE GREEN GOBLIN THREW HER OFF THE BRIDGE AND NOW SHE'S DEAD!" I exclaim in my own personal agony.

My dad stares at me.

"Is this a goddamned comic book..?" he asks while chewing his food. I nod yes and he says,

Where/how do you buy your comics?: I go to the comics shop down the street. METRO COMICS at the San Patricia Plaza. Great, great place and staff.

Floppies or trades?: mmmm floppies, but I my wife prefers the trades. She prefers the whole story intact. She doesn't understand the whole "come back in thirty days for another chapter" concept. She's also much more sophisticated a reader than I am.

Marvel or DC?: Marvel. Although, Marv Wolfman and George Perez got me into Teen Titans. What an incredible run. "Who is Donna Troy?" is one of my all-time, top ten comics.

Star Wars or Star Trek?: Oh not even CLOSE. Trek, baby!! Many, many more satisfying stories with Star Trek. Star Wars become a toy machine and once they threw in teddy bears who only threw sticks and rocks at stormtroopers... AND KNOCKED THEM OUT... I was done with Star Wars.

Non-comic book hobbies: I'm a great cook. Not kidding. I'm always learning. Lily got me a great Christmas gift this year. She's arranged for a four-star chef to come to our house and teach me how to cook Puerto Rican Cuisine! I'll be learning rice and beans, how to make a sofrito marinade, pumpkin soup and some other dishes. My brother and his girlfriend will be here during that time, so they're in the class too.

Personal motto: "It's only embarrassing until next week's shipping list comes out."

How did you start reading "Occasional Superheroine?": I believe David Arroyo turned me on to this. It's my daily read.
Posted by Verge at 9:04 PM