The New Emovengers and Green Emo and Black Canary 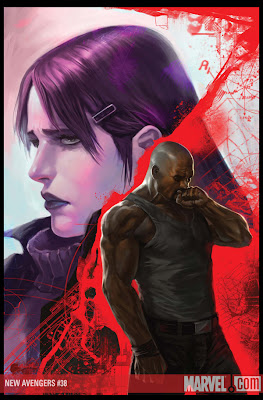 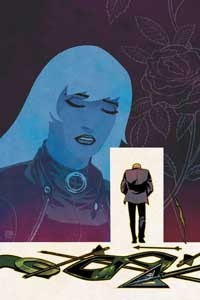 Synopsis of New Avengers #38:
Luke Cage is heartbroken to come home and find that his wife Jessica is not there. He calls her and they talk. He wants her to come home, but she says "think of the baby!" They go back and forth on the phone, expressing their feelings, for five pages. Then Luke goes to visit Jessica, and they talk, expressing their feelings, for seven pages. They wonder if the marriage can be saved. Jessica says she still loves Luke, but "think of the baby!" Then, as a change of pace, Ms. Marvel talks to Luke, and then she talks to Black Widow. We turn then to the rest of the New Avengers, who have a new apartment to live in. Daniel Rand shows them where the toilet is. The New Avengers debate as to whether they might save time using disposable plates as opposed to having to wash the dishes. Wolverine says he will go to Wendy's. Jessica and Luke are now apart. The last shot is as if to say, "think of the baby!"

Synopsis of Green Arrow and Black Canary #5
Black Canary talks to Red Arrow. Then she talks to Dr. Mid-Nite about Connor's tragic condition. Ollie sits by Connor's bedside, heartbroken. Connor is brain dead -- another story ripped from the headlines, just like Terri Schiavo. Ollie tells a brain dead Connor what a lousy father he has been. We flashback to Ollie being a terrible father, and a terrible boyfriend. Paternity tests, dead-beat dad, single mom. Connor's mom tells Ollie, "think of the baby!" and that little Connor is indeed adorable! Back to the present, Ollie still feels terrible. Then Black Canary and Green Arrow decide to talk about their feelings. They get married. But, just like the last time they got married (several months ago), their honeymoon is interrupted by a cliffhanger. Green Arrow thinks about it, and decides that next issue, he might actually have an action scene.

I understand the need to have a certain amount of emotion and character development in one's superhero comics. But, these issues out-Claremont Claremont. They are both the sort of thing you find in those Lifetime original movies.

Admittedly, Brian Michael Bendis had taken a similar approach in Alias -- but it was much more effective in that book. The big problem for me in New Avengers #38 is redundancy in the scripting. Even soap opera scripts recognize that there is only a certain amount of time for their emo dialog. In contrast, Luke and Jessica say their Bendisy lines, then say them again, then say them again. And, just in case you missed it, they say them again.

Judd Winick, seemingly recognizing the limits of his superhero-writing ability, tries to break up all the emo with sensationalistic, over-the-top cliffhangers. It's an awkward insertion of action, but he at least tries to wake people up. It's the best he can do.

I am not saying that a superhero comic by necessity needs action. But these two comics are the other extreme of the spectrum. (And yeah, I know that these books could have been themed this way for Valentine's Day -- but Bendis has had the same problem in other books lately and so has Winick).

Check out Hannibal Tabu's column for another view of these issues.
Posted by Verge at 4:00 PM