Two reasons for this weekly feature:

1) I felt that I really had to start reading this stuff in order to fully say that I truly know what's going on in this industry.

Also, I do find some manga rather enjoyable, especially really "light" shojo and the horror titles.

That said, my lack of manga knowledge might show in this column, so please excuse me. 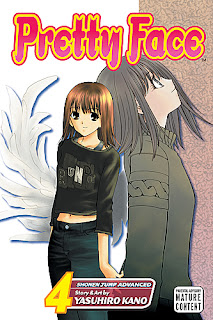 Simply put, Pretty Face is about a guy who gets in a horrible accident and has his face replaced in plastic surgery with that of the girl he has a crush on. Now he must dress like the girl's missing twin sister.

I am fascinated by manga's ability to take sexually-adventurous subject matter and package it in such a Disney-fied, sunny, stylistic manner. Questioning one's sexual identity would seem to be an issue for developing teens, and mature subject matter titles like Pretty Face (Viz recommends the book for readers 16+ and has an advisory label on the cover) address these concerns in a non-threatening way.

That said, there are a lot of panties in this book. And a pair of breasts (that we are assured are actually fake and on a man). That said, how is this that much different from teen sex comedies like American Pie? Maybe the fake breasts on a man part. Then again, Bugs Bunny was dancing around with oranges in his shirt more than 50 years ago.

As for the readability of the book -- it was enjoyable. It had that rapid-fire screwball comedy element rife with double-entendres like a Three's Company episode. I really find I have to suspend belief that macho karate champion Rando is the same little blond chick running around the book; the way he/she is drawn, the male body elements are pretty much non-existent. Except for the cliffhangers where we almost see his wiener (of which, as you can imagine, are many).

Still haven't read enough Shojo to make a comparative analysis in terms of quality, but it was alright. Although I would like to ask series creator Yasuhiro Kano what he means by calling Natsuo a "panties character" (clue: I think it has something to do with all those shots of her panties).
Posted by Verge at 2:00 PM