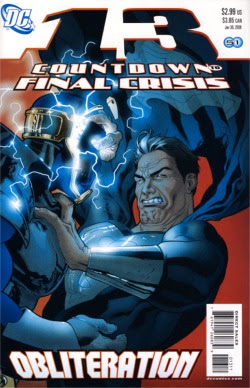 "Why'd you have to come here?! Aren't there enough fake Earths to mess up?!"
--Evil Fanboy Superman

I actually purchased Countdown #13. I tossed my dimes onto the counter of Forbidden Planet and said, "yes! this one! me -- I am wanting it! bag it up!"

The reason was -- with so much DC product and future plans still tied into the weekly series, I thought I could not get a full understanding of the company's superhero output without at some point revisiting this title.

So here we are. Get comfortable.

Pro: The art is rather open, and the action moves fairly faster than I anticipated.

Con: The storytelling is jagged and abrupt. Think a movie where there is a splice in the film -- how did Action A get to Action B? The narrative flow, at parts, is rather poor. 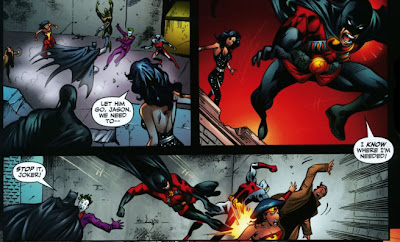 Pro: The cover by Stephane Roux & Karine Boccanfuso is attractive.

Pro: The staples were all intact, and well affixed to my copy. They were not loose, but rather all surely placed.

Con: The book as a whole, story and art, seems rushed. Too much exposition, not enough heart.

The question comes to mind -- could a good enough editor have been able to raise this book up a few levels?

There is no excuse in this series not to have a recap page. This series is the spine of the DCU. It cannot be assumed that its only readership is people who have been following the book from the the first issue. This book is leading into one of the biggest DC events of the year -- or the decade. Wouldn't they want to attract new readers and get as many people on board as possible?

The art in this issue was touch and go for me. Some panels were good, others were not. Again, this book is the spine of the DCU. The art on this series has moved from "meh" to "yuck" to "inoffensive" to "serviceable." I want an answer why this has been so. Is it merely time constraints? Or poor planning?

At this point, I see Countdown as a lame duck series, and I would assume DC editorial feels the same way. It's just a weekly inconvenience to shove out the door to lead into Final Crisis. I do not think the idea of the book was bad in-and-of-itself, but the execution was poor.

That said, I can see how this book would be fun to a hardcore DC fan with a yen for continuity & nostalgia. Too bad the characterization of Superman Prime is poking fun of them.

But more than that, Superman Prime, with his infantile, self-centered attitude and black "edgy" costume, represents everything that is wrong with the current DCU. As Grant Morrison might say, he is the symbolic "totem" that encapsulates all this negativity, and it will be good for me as a reader to see him put to rest once-and-for all. If the real purpose of Countdown was to exorcize this particular quality from the DC Universe, then perhaps it was all worth it.
Posted by Verge at 6:19 PM

Email ThisBlogThis!Share to TwitterShare to FacebookShare to Pinterest
Labels: Countdown