FANTASTIC COMICS #24: The GRINDHOUSE of Comics 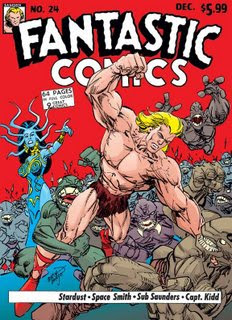 The first 3 pages of Fantastic Comics #24 alone should give the book an Eisner nomination. Part of Image Comics' The Next Issue Project, Fantastic Comics presents the "next" adventures of a handful of public domain superheroes of yesteryear. However, unlike Dynamite Entertainment's Project Superpowers, which utilizes several of the same characters, The Next Issue Project doesn't play it straight, opting instead for an approach very reminiscent of Quentin Tarantino's "Grindhouse."

A different creative team takes a crack at each story in Fantastic Comics #24, aping the format of an actual Golden Age comic. Standouts this issue include: 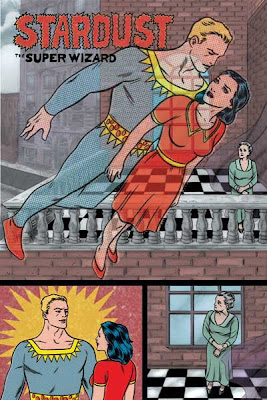 At the ridiculously low price of $5.99 for 64 oversized pages of original full-color comics on sturdy paper stock (printed in two tones - white and "old newsprint"), I would heartily recommend Fantastic Comics #24.

As a side note, I really am impressed with how far Image has come since the old school days. There was, I admit, a certain excitement when the first Image Comics launched so many years ago. But, there has definitely been evolutionary process afoot.
Posted by Verge at 2:00 PM