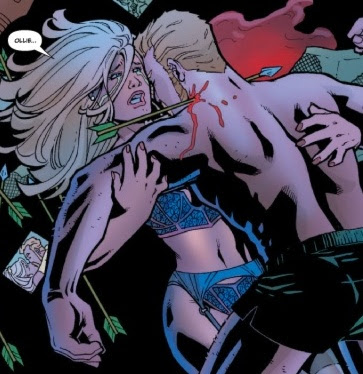 At WonderCon yesterday Judd Winick made the following telling comments:

Concerning the infamous honeymoon of Black Canary and Green Arrow:

"It was so over the top we thought it was obvious....we brought him back right away."

On the fate of Connor:

"I'm the schmuck that brought back Jason Todd - he can always come back."

This is all exactly what is wrong with comics today. "It means nothing, it's just comics mumbo-jumbo."

Hey, even if you plan on bringing the character back later -- which, in my opinion, will almost certainly be the case in some of Marvel's changes as of late -- don't totally bust down the wall of illusion and just admit it, admitting that any plot twist you create doesn't mean anything.

It's like you don't care. "It's just comics mumbo-jumbo, this sort of thing happens all the time."

Especially with characters like Green Arrow, Black Canary, and Connor, who have been pre-established with some degree of depth.
Posted by Verge at 7:40 AM