With JSA, The Twelve, and now Project Superheroes, it seems as if superhero narratives about WW II (or, rather, those of the capes-and-masks set who fought in the conflict) are the hot topic in comics. Not that they ever really were an obscure topic in the medium. Maybe there has been a continual hearkening back to that time of real heroes and villains because that black/white dichotomy was the fuel by which the comic book superheroes operated.

I've always been a big fan of the Justice Society and the All-Star Squadron. I consider Roy Thomas the master at these narratives, skillfully weaving the lives, personalities, histories, and words of a huge cast while at the same time crafting stories that both echo the past but somehow remain relevant.

There are three World War II superhero team books on the stands at the present (Image Comics' upcoming Next Issue Project possibly making it four). Let's take a quick look at their most recent issues: 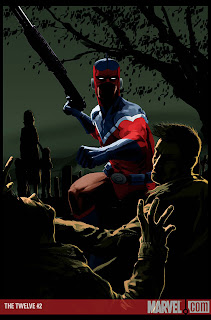 The mini-series is billed as a "book-length thriller," and it certainly lives up to its name. Last issue dealt with a lot of exposition, tracing how this team of superheroes from the 1940s ended up in our present; but #2 really delves into the histories and motivations of the characters, setting up a number or intriguing bits that will most certainly be crucial plot points later on. The art in this book, by Chris Weston, is a stand-out; the full-page shot of Captain Wonder cradling his wife's grave is particularly exquisite. Looking forward to more.
Rating: A 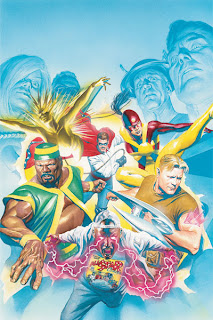 I really wanted to like this issue -- I mean, with gorgeous covers like this by Alex Ross, how can you not like it? Several reasons. First, though Geoff Johns is certainly an accomplished writer, he clearly needed tighter editing in this book. The opening, with an ensemble cast futzing around at the boxing ring, was muddled and went on for far too long.

Plus, I have a really hard time believing that Jakeem Thunder, even given his young age, would spout out "Who's the Asian hottie?" when first faced with the new Judomaster. If there was any character who I pitied in this issue, it was her, being surrounded by a bunch of back-slapping assholes.

The sequence with John Irons was also in need of some editing/quality control; John's opening dialog with his wife sounded like pure exposition devoid of any human quality. And Dale Eaglesham's art, while reminiscent of that great Stephen Sadowski work on the previous JSA, has occasional difficulty in getting from point A to point B in the visual storytelling.

In fact, the only saving grace of this issue, as far as I was concerned, was the introduction of the new Amazing Man, a character I always liked. Clad in a new dasheeki-inspired costume and possessing a backstory interwoven with the Katrina tragedy, he is a character I want to know more about (and who bears more than a passing resemblance to Ving Rhames. Or Jim Brown. Pick your era.). 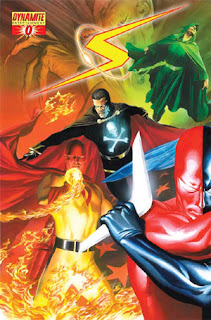 Speaking of Sadowski, here he is in the debut issue of Project Superpowers by Dynamite Entertainment -- again with a cover by Alex Ross. I really enjoyed this book, and appreciated the unexpected twists and turns the story took. Project Superpowers has more in common with The Twelve than JSA, in the darkness of the storyline and the far grayer tone of the heroes' mission and morality.

That said, Jim Krueger's writing could have been edited down a bit, for the sheer volume of words used; though of course in any first issue there is need for a certain amount of exposition.

As for the look of the book, the art direction by Alex Ross for the book really shows. And the designs of such classic characters as The Black Terror, The Face, and "The Death-Defying Devil" are truly eye-catching and an added value to Dynamite's stable of properties.

New comments are not allowed.