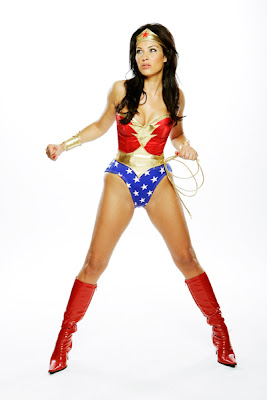 The Playmate in question, Tiffany Fallon, is actually a stated fan of Wonder Woman even before the Playboy cover came out:

"I'm obsessed with Wonder Woman. I grew up and I had the Wonder Woman Underoos, when Underoos first came out. And I was always a big fan of the show and Lynda Carter. And the older I got, the more I would get these comments like, "My god, you look like Lynda Carter in that picture!" And it doesn't happen all the time, but I just grew to appreciate her and the character and the campiness of the project. I was Wonder Woman at one of the Playboy Mansion parties, and I just started getting all these comments, like, "My god! You would make a great Wonder Woman!" And I'm like, "You know, I would!" [Laughs]. And so I just have fun with it. And I heard they were starting to make a movie about it, and so I was like, "You know… Stranger things have happened in my life!" You never know. But that would be something I'd be really proud to be a part of."

This raises several questions/comments from me.

1. I have to wonder (if you will excuse the pun) how much of the subject matter was Playboy's initial idea and how much of it was worked out with Tiffany because she's specifically a fan of the character. She seems to want to be identified with the character.

2. There is obviously, at least for me, a measure of PR involved with this, with Tiffany making a play for the proposed (shelved?) Wonder Woman movie.

3. If comic book publishers are going to use cheesecake art for their mainstream superhero characters anyway, how can they complain about having a Playboy Playmate portray one of them? Outside of copyright issues?

4. If comic book publishers are going to use cheesecake art for their mainstream superhero characters anyway, why can't Playboy Playmate Tiffany Fallon be Wonder Woman?

Has the fact that she has posed nude make her a "dirty" person unfit to wear the WW bustier & girdle?

As women, do we want to point a finger and say that a certain woman can't play a superheroine because she's "bad" for having posed nude? Are we doing this because as women we feel that she has betrayed us, that she has contributed to a perceived degradation of our gender? How much of it comes from a Judeo-Christian "nudity is sinful" perspective? If as women we operate from the "sexuality is bad" perspective, are we unwittingly buying in to a mentality where the "sinful nudity" parts are intertwined with "women are essentially sinful" parts?

If Tiffany Fallon wants to make a living modeling her nude body, and she spends a great deal every day at the gym etc. to invest in this, do we have the right to condemn her? What if she was only a nude model for lesbian women, and no men were ever going to look at her flesh? Would that be acceptable? Is it the fact that she strips down for men that is the issue?

Is Tiffany Fallon a bad person? Has she been victimized by Playboy? Is she a "marked" woman because she been photographed naked?

Have we given her a Scarlet Letter?
Posted by Verge at 6:00 PM