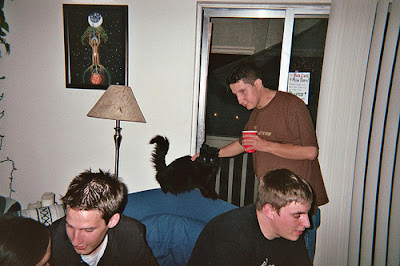 Location:
An undisclosed base in Colorado

Comics you read:
Way too freakin' many.

I also read X-Factor, 100 Bullets (in trade form), The Ultimates, She-Hulk, Booster Gold and all the Avengers titles (including the Initiative, for which I hate myself on ethical grounds). I also love reading issues of Young Avengers and Runaways every decade they come out.

Off the superhero track, I . . . oh, man. I just realized that with Queen & Country gone, my indie cred is suffering. Does the new Buffy and Angel series count?

Fave artist:
Arrgh. If I say Edward Hopper, I'm just being a smart-ass, aren't I? I know that no matter who I say, I'll be slapping my forehead for forgetting somebody later. As it will become increasingly clear, I'm really horrible at giving short answers to "favorite" questions.

I'll say . . . John Cassaday. Planetary was the first comic in a long time to make me stop reading, put down the book and just stare at the art in awe.

Fave writer:
Neil Gaiman, for epic poetry. He's in a class by himself.

As far nuts and bolts superhero stuff goes . . . God. This is hard. Part of me wants to say Joss Whedon but honestly, I'd have to go with Greg Rucka. His stories sometimes frustrate me but I get no better sense of how to write a good book than from him. More importantly, I can tell he cares deeply about his characters and his attention to detail is amazing. He's a writer's writer.

All that said - I envy Brubaker's nuances, Whedon and Vaughn's uncanny senses of dialogue and character-driven plot, Simone and Slott's genuine freewheeling love of the characters and The Genius Warrens (Adam and Ellis) for their amazing ideas & general badassery which hide their hearts of gold. Or possibly uranium. It's hard to say.

Fave character:
Is saying Buffy Summers a cop-out? She is in a comic book now . . .

To be more fanboyish, Spider-Man. I only read Ult. Spidey now but he's the first fictional character I ever connected with, so he still gets top billing. Deadpool, Jessica Jones, Jamie Madrox, Ted Kord, Emma Frost and Catwoman all make the runners-up list, because I love film noir and characters who tend to make genuinely human mistakes.

First comic you ever read:
Spectacular Spider-Man #106 - http://www.mycomicshop.com/viewissue?IVID=7320971
I was 8 years old and my folks were taking me to see the Great National Sand Dunes in an RV. I was stuck going to see large piles of sand and the boredom was terminal. They bought me this at a supermarket to keep me quiet since I'd left all my novels at home. The issue starred Spider-Man with special guest stars Wasp, Paladin and Starfox.

I was entranced at once. Who were all these bug people and why were they kicking men with shotguns? Nothing made a lick of sense to me so I had to learn more to understand this crazy new world. Soon thereafter, I was quoting Spider-Man and the Thing at family gatherings, much to my parents' chagrin. Just try explaining to an 8-year-old why, if Spider-Man says it, it's funny but that isn't funny when you say "Is that a shotgun in your pocket or are you happy to see me?". And especially not to your Aunt Susan. Never, ever to Aunt Susan.

Your favorite comic book "memory": (either related to comics or actually in a comic)
Realizing that my High School sweetheart loved the X-Men and Catwoman with just as much fanboy fervor as I did, if not more so. Being able to have a conversation for hours and hours with anybody as a geektastic teen was amazing - but with my geek girlfriend no less? I had completely hit the jackpot, tiger, to cheesily coin a phrase.

Alternatively - when the Spider-Man story "Kraven's Last Hunt" blew the top off my 10-year-old Good Little Catholic Boy Head. This was when I realized that comics could be so much more than people in spandex punching each other. Same thing years later to a much amplified degree, when I first read Maus and Sandman in the span of the same month.

Most frustrating comic book "moment":
I have to choose just one? Really?

I suppose it was having to scrape together Entertainment Weekly reviews and other ephemera to support my thesis on the growing acceptance of comic books as a respected medium in American culture . . . several years before the ginormous Manga boom, Frank Miller's stuff hitting it huge on the big screen, etcetera, etcetera, so on and so forth. On the bright side, I still managed to get an A-.

On a more fanboyish note, I'd have to say collecting all the issues of Wonder Man, then reading Force Works #1 to see his continuing adventures . . . only to have him get blown up by the end of the issue. That was fun.

Where/how do you buy your comics?:
Step One: Go to one of two indie comic book shops before work on Wednesday to see if they have new books in. Find out they don't. Leave.

Step Two: Go to indie comic book shop again on Thursday and/or the weekend to see if they have new books in. If yes, buy new books. If no, give up and go to Unstoppable Corporate Chain O' Comics.

If it's something I know will sell out like hotcakes, like the Buffy comic, I might skip steps 1 and 2 and shamelessly buy it at the UCCoC on Wednesday morning. Which reminds me, I need to find copies of Crime Bible 3 and Freddy Vs. Jason Vs. Ash 2.

Floppies or trades?:
Floppies for almost everything. I don't have a lot of patience or cash and I enjoy the "Oh, shit!" cliffhanger feeling a good monthly can provide.

That said, 100 Bullets, Ex Machina and Fables are the three I've only ever read in trade form when the floppies were readily available. 100 Bullets is so bloody complicated that trades are way handier to refer to for backstory and I think I'd get lost if I only read one issue a month. Ex Machina and Fables are both good reads but I think I just prefer them in short, concentrated doses.

Marvel or DC?:
Hmmmm. I tend to vacillate. Marvel, as much as they're pissing me off right now.

I grew up a Marvel Zombie. While I eventually learned to appreciate the epic scale and genuine sense of wonder and fun DC brings to the table, Marvel has DC beat (by a nose) for the sheer volume of their messy, human characters. Although lately, DC's been the one to make me jump up and down with fanboy glee/rage at how they've killed/brought back from the dead certain characters. I actually blogged about this recently.

Anyways - yeah, Marvel, if just for the fact that they put out Runaways (however, sporadically). Molly Hayes rules over us all.

Star Wars or Star Trek?:
Ack. Can I take a mulligan and say Firefly or Farscape instead? They're dirtier and full of more of the morally ambiguous thieving sorts that I love.

If I must - Star Trek. I just plain like the characters more. I also have to admit that a Star Trek novel once made me a little misty-eyed - and yes, I'm appropriately ashamed to admit to this in public. It was Imzadi by Peter David, just in case you were wondering.

Plus, Roddenberry's toys pwn those of Lucas. There's a reason your cell phone flips open like a Star Trek communicator, folks.

Personal motto:
"Shit! What the fuck is going on now?"

How did you start reading "Occasional Superheroine?":
I found a link from "When Fangirls Attack" and followed it. Shortly thereafter, I learned how awesome you were and have been enjoying your stuff ever since.
Posted by Verge at 11:22 AM