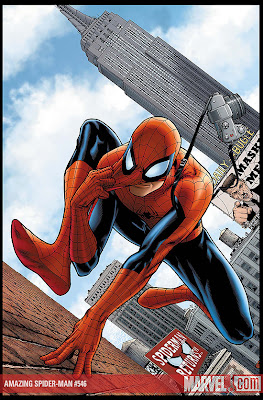 By now I think pretty much everybody has sounded off on this book and the "Brand New Day" direction. Except me. Well, I did milk the controversy for all it was worth...but now I still have to read and review the thing!

Peter Parker: Simply Irresistible
Though the splash page depicts Peter Parker smooching it up with a "Girls Gone Wild" type chick, it really has nothing to do with Peter actively "cheating" on Mary Jane. As we find out later, his lips were "raped." Some might say that having established in this issue that Peter is, in some senses, kind of a bum, having him chased and molested by some babe is unrealistic. To which I say: Kevin Federline.

Harry Osborn: Creep
Far more concerning to me is the establishment of Peter's constant borrowing of money from erstwhile friend Harry Osborn. I mean, speaking of deals with the devil...Peter depending on Harry for scratch is like taking home a bunch of weed from your drug dealer "on loan." It's not going to end well.

Is Harry the prototypical "creep" or what? They can't show him snort some coke in this book (or smoke a cigarette) but you intuitively *know* he must totally do that between panels. He's the type of guy Perez Hilton would draw little white dots coming from his nose in those paparazzi photos. If Harry Osborn was a real person he's be the dude who gave Lindsey or Britney that fatal dose and then sold the sex tapes afterwards.

Harold And Kumar meet Peter Parker
In general, Peter Parker's sense of judgement has been not so great as of late. That concerns me more than anything. He seems not to be acting from the position of a lifetime of experience. I mean, this isn't Peter from high school, but he sure is acting like he is. If he's twentysomething, doesn't that make him Generation Y? Slackers are Generation X. Generation Y is like my sister, the person with a full stock portfolio who clips coupons. I'm Generation X. I use my haircut money to buy comic books.

It seems like the target audience, 18-30, would be more "together" than to identify with Slacker Peter. The only thing Slacker Peter is missing is a blunt.

And yet I have to believe that, like the classic "Spider-Man" trope, Peter Parker has to learn the hard way that "with great power comes great responsibility," and that he wil shape up.

Yeah, But What About The Actual Comic?
In terms of the actual comic, I found it enjoyable, engaging, and very accessible to a new reader (me). I haven't read a Spider-Man comic in like forever. This book laid the current Spidey mythos all out for me in an easy-to-grasp way (thanks in part to a handy "chart" drawn by John Romita Jr.). Also, each upcoming arc is previewed for me via a short backup story with words & art from their respective creative teams -- I thought this was a smart thing to do, and really gave me a clear picture of what lies ahead.

Where I see the book having problems is with the hardcore readers who have been following their continuity closely. It's very hard for such readers to shift gears like that, and I think that's why we have witnessed so much emotion on the issue. On the other side of the coin is a reader new to the regular title like me. I tried on multiple occasions in the past to get "into" Spider-Man. Every time tried, the current labyrinthine continuity stymied me. If it wasn't the Clone Saga, it was The Other.

At least now, I am willing to pick this book up on a regular basis. I understand it. It isn't perfect, but it has laid all the elements of the storyline out for me and I am interested in seeing where they are all headed.

Peter Parker: Sensitive Guy Who Doesn't Care About Big Boobs
And what are the odds that Peter is going to nail the sexy self-effacing bookish police chick who is playing it coy? Probably pretty high. See, what Peter *really* wants is to go with a girl with brains, with substance over style. That was what the misleading splash page was trying to point out. I mean, if he ends up marrying a fashion model along the way, well, then...
Posted by Verge at 6:43 PM