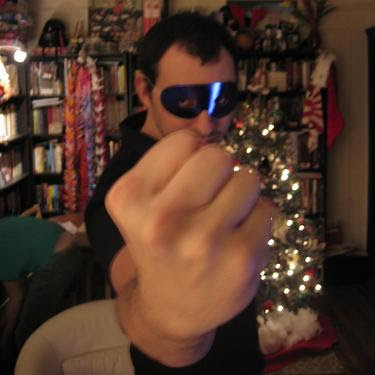 Comics you read: I read what my friends buy-- that is, I read them second-hand. Besides that, I have the benefit of the bookstore: I can read whatever we get in stock. The result of this is that my current periodicals are totally based on what two guys think is any good, & those titles fluctuate. That said, ever since the Sinestro Corps War we've been on a GL kick, & ever since Annihilation there has been a lot of attention paid to Nova...who knew sci-fi comics would turn out to be the winners of 2007? Besides that, the two best titles of last year were Immortal Iron Fist & All-Star Superman. Other fun reads are Spider-man <3s style="font-weight: bold;">Fave artist: Art? I understand that the pictures are an essential part of the medium, but I don't have the faculties to judge. Who does the Fables & Batgirl covers? That guy. He's cool.

Fave character: Now that is a tall order. Batgirl is a really solid lady, but she's been through a rough year. Same goes for Black Adam. I really like the Metal Men, too; Also maybe my favorite team of the year was China's Great Ten. At the end of the day, though, I guess the answer is Darkseid.

First comic you ever read: An old, old bunch of comics lying in the attic. Metal Men versus the Missile Men. Then a Man-thing where he fights an undead chain-gang. I had the flu. It was awesome.

Your favorite comic book "memory": (either related to comics or actually in a comic) Maybe the whole run of Sandman? It is what turned me into a comic geek-- until then, the bug had never bitten me, but once it did I went from Vertigo on out. Within Sandman? Tough to say what my favorite moment is. Probably near the end: I like The Kindly Ones & The Wake a whole lot.

Most frustrating comic book "moment": Geez. I work kind of hard to forget about this stuff, relying on the serial nature of the medium to plow these bad ideas under. Ever? That is pretty hard to get my head around. Knightfall? Recently this OMD & the evil Batgirl have been banes of mine, but I don't want to make the mistake of thinking that being more recent makes it more "most."

Where/how do you buy your comics?: I order them to the store & then pick them up. Pick of the litter!

Floppies or trades?: Trades. I don't have any interest in owning floppies.

Marvel or DC?: DC, hands down. I like the mythic quality of DC, but I'm not an "anti-Marvel" guy. A lot of Marvel stuff is great.

Star Wars or Star Trek?: See above regarding "mythic" as preferred. Which is to say: Star Wars, in a heartbeat.

Non-comic book hobbies: Roleplaying games & drinking. Going to the gym & watching television. Reading & exploring. Been in a couple of plays, written a couple of books. Mostly it is a lot of maintenance: entertainment keeps the old noodle supple, socializing keeps the ape-skills easy, exercising makes the meat-sack strong. I guess I spend the most time daydreaming about gaming, though. I go the pretentious route with it: RPGs are post-modern masterpieces of exploded story-telling, conceptualizing many of the successes of theater & making it codified & available to small cell-like groups.

How did you start reading "Occasional Superheroine?": I think I made the decision one day to get into feminist comics bloggers after I realized that the only people with interesting opinions about comics-- critical opinions of ANY sort, really-- were feminist bloggers. So I added a bunch to my feed reader. YOU ARE MY FAVORITE THOUGH.
Posted by Verge at 5:33 PM