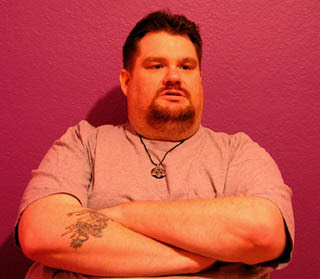 Comics you read: Oh, boy. I work in a comics store, and review them for a website, so it might be easier to ask me what I *don't* read. I tend to read as much as I can from publishers large and small each week, to best serve our customers. What I actually buy is much more limited, though. I tend to be pretty picky about what I'll actually take home. Current books that make it include:

Brave and the Bold, Blue Beetle, Birds of Prey, Manhunter, Batman and the Outsiders, Wonder Woman, Fables, and Northlanders from DC.

Fave artist: Dan Brereton. His creepy style of painting has always just done it for me.

Fave writer: This is a tough one. It's a toss-up between Gail Simone and Jeff Parker right now, I think, though this changes all the time as I discover new people.

Fave character: Probably Lady Shiva, from DC. Somewhat obscure, and not all that important, but I've just always liked her. Can't really explain why.

First comic you ever read: I dunno about the first one I read, but the first one I actually remember reading was "Saga of the Swamp Thing" #21, 'The Anatomy Lesson', by Alan Moore, Stephen Bissette, Rick Veitch, and John Totleben. I was maybe ten when I read it, and it had a huge impact on me. The issue scared me, intrigued me, and delighted me, all at the same time.

Your favorite comic book "memory": (either related to comics or actually in a comic) The scene from near the end of "Lone Wolf and Cub", where Daigoro protects the swords of his father and Yagyu from all comers, including a runaway wagon, showing such devotion that he inspires the surrounding people to form a ring of protection around the blades.

Most frustrating comic book "moment": When I realized that most comics fans are not into the same things I am, and as a result many of the books I enjoy will be canceled early due to low sales.

Where/how do you buy your comics?: At the store where I work each week.

Floppies or trades?: Both, though I prefer trades.

Marvel or DC?: Again, both. I don't care who publishes a comic so long as it's good.

Personal motto: Be honest, with yourself and everyone else.

How did you start reading "Occasional Superheroine?": I followed a link from Tom Beland's blog.
Posted by Verge at 1:00 AM