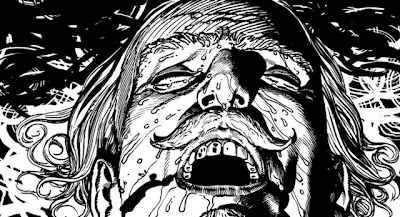 Sean Kleefeld's latest post talks about comic book "events" -- and focuses particularly on the oft-used phrase -- "AND NOTHING WILL EVER BE THE SAME AGAIN!"
One passage in particular caught my eye:

"Let me ask you this: how many of you really believe that we'll never see Steve
Rogers in the Captain America uniform again? You're being lied to. "

Are we ever going to see a death that matters in comic books again?

I had lunch a few weeks back with a friend who echoed the same sentiment, adding that the only character death that has effected her recently was that of David in Strangers In Paradise. Of course, SIP was not a superhero comic, and there was much less possibility of David turning out to be a Skrull, or brought back when angry Katchoo punched a hole into time.

But, if Comics really wants to wow the crowd & shake their readership out of their cynicism, might I suggest a truly shocking, world-shaking gimmick -- a death that stays dead.

Of course, nobody would believe DC or Marvel if they announced they were actually killing a character off (permanent-like), so Dan Didio or Joe Quesada swearing on a stack of Bibles would possibly have to be involved. However, I firmly believe that truly killing off a character and sticking with it, even months or years into the future, might be the hot new comic book gimmick to get the readers talking.

The cover blurb might read: "THIS ISSUE, SOMEONE DIES -- AND STAYS DEAD!"
Posted by Verge at 12:18 PM