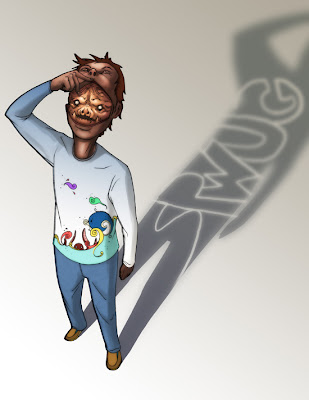 Fave character(s): Spider-Man (well, not the OMD one. He's a douche), Batman, Manji, DeliriumFirst comic you ever read:I'm sure it was one of my dad's old Thor issues.

Your favorite comic book "memory": Got three.The webcomic I illustrate, Erfworld, was listed in Time Magazine's Top10 Graphic Novels of 2007!Landed my first professional gig coloring Spider-Girl covers afterwinning a fan art contest.Sandman: Brief Lives. Dream and Delirium visit Destiny whilesearching for their lost brother. Destiny says to Dream, "She doesnot love you, and truly, she never did. She will not change her mind,no matter how long nor how deeply you wish that this were the case."I rediscovered this book while I was going through a divorce andsomehow, after reading that again everything just seemed to make sense.

Floppies or trades?: Trades. Still collect the floppies, but I ultimately prefer the trades.

Marvel or DC?: Marvel. Sorry, my dad grew up on Marvel comics so I'm geneticallydisposed to like them more. Though lately...

Personal motto: "No matter where you go, there you are." --Buckaroo Banzai

How did you start reading "Occasional Superheroine?": Rich Johnston linked to your "Goodbye to Comics" series. Read throughthe entire series and I've been hooked ever since.
Posted by Verge at 5:05 PM