Are We Headed For Another Comics Recession? 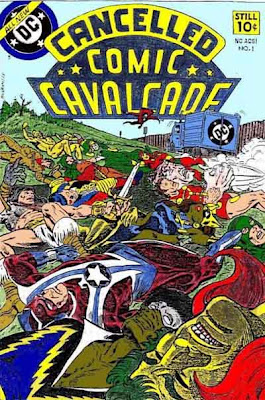 Ye Olde Comick Booke Blog questions whether the current state of the comic book industry is not mirroring the way it was in the 1990s:

God forbid we really return to that halcyon time of lore...

I remember the early 90s. I bought tons of comics a week, read none of them besides Grant Morrison's Doom Patrol. Every comic I bought was for investment. I regularly bought two or three of the same comic at a time. Bags and boards.

I was still actually reading comics in the late 80's. X-Men, Batman, Justice League. Then all the spinoffs started. My plan was always to buy every X-book that came out. But there were suddenly too many and I gave up. Ditto with Batman, a boom spurred on by the movie coming out in '89. And while I loved Giffen's JLA, once he left the title was dry for me (plus the glut of other JLA-inspired titles produced to cash in to something that was no longer there.)

This being said, it should be remembered that the investment fever that gripped the populace at that time had spread far beyond the fanbase and infected the non-reader. Comic books were considered a solid investment, something to stash away and pay your child's college tuition with. In fact, that phrase I heard bandied about quite a lot back then, used to assuage the fears of skeptical wives: "this will pay for our children's college tuition."

There was also quite a bit of small-time crime intertwined with the comics speculation boom of the 90s. Comic shops in Brooklyn were getting robbed left-and-right, either by teenagers shoplifting in bulk or out-and-out heists after hours.

However, I really don't think what we have now is equivalent to that golden time. I think the general comic- and non-comic-reader population realizes that modern comic books are not a "sure-thing" investment. The need for single back-issues have largely been replaced by a healthy trade-paperback publishing program. While there are popular fan-fave artists, none have really inspired the sort of utter hysteria Rob Liefeld or Jim Lee did back in the day.

However, I do agree to an extent with Ye Olde Comick Booke Blog on this point:

...instead of figuring out how to better market their product to the world at large they seem content to wring every dollar they can out of the fans who are still here, bleeding them dry with redundancy. If the sheer number of titles isn't audacious enough there are the dozens of mini-series that clog the racks every week...

I think the biggest way to "kill" a hot property in comics is to bloat it with spinoffs and redundant titles. It's a scattershot, short-term investment business strategy that operates on the cynical notion that if they love the One, they're going to buy the All. Now, if such a strategy was accompanied by honest-to-God awesome creative teams and stories, that would be great. But that's not usually the case. What ends up happening is this:

After Boatload of Crap comes reader apathy, 25-cent bin, etc.
However, the "glut-the-market" strategy works great if you plan on just getting in, glutting the market, and rushing out.

What comes after the Glut is...

Recession = chaos. Books are cancelled in droves. Editorial & creative teams can change wildly. Scorched-Earth. "Who's in charge here?" Nobody knows. The future is in doubt.

In that sort of environment, some of the best, most original comic book material can sneak through. Because nobody's watching too closely. Because those carefully-laid plans are temporarily shut-off. It's about operating under-the-radar.

Will a Recession comparable to the 70s and 90s happen again in comics? I really don't know; I certainly can't see into the future.

But where might the next "big thing" in comic books come from?

I'm reading a book right now called "The Black Swan: The Impact Of The Highly Improbable." It's about how sometimes the biggest successes and innovations come completely out of "nowhere."

I believe that the next golden phase in mainstream comic books will not come about as the result of a boardroom meeting or writer's summit. I believe the next "hot thing," the next comic book bestseller, is right under our noses. And what the comic book companies need are editors with vision to recognize this when they see it and nurture it and bring it out into the world.
Posted by Verge at 1:00 PM