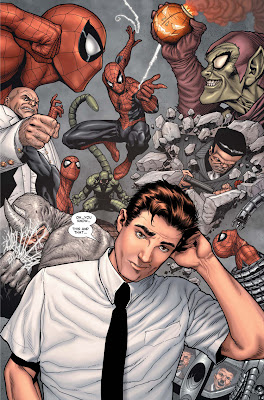 OS: Dan, were you a fan of Spider-Man? Did you read the comic as a kid?

SLOTT: Oh God, I love Spider-Man! My cousin had this comic book collection when I was a kid...back then I didn't know you could even buy comic books, I just thought of his stash as this magic comic collection. And he lent me comics, and that's how I started to read them.

And then I found out that Spider-Man was "appearing" at the 7-Eleven in my home town. It was like I could hear "Ave Maria," I was so excited. And even though I didn't have any money on me, I must have spent like the entire day at the 7-Eleven, choosing the best comic that I would bring up to Spider-Man to sign. Then I rushed home and asked my dad if he could give me any money to buy the comic book, and right then and there he gave me my first allowance, 25 cents.

I camped out early the day of the Spider-Man appearance, even though it turned out like only three people showed up. I wanted to make sure I got there early so I could see him swing down from the skies. I was actually looking to the skies. And then this pick-up truck drives down the freeway, and they've got Spider-Man standing in the back with his arms akimbo. The truck stops and he jumps off and lands in a perfect Spider-Man squat. I was awed and scared to talk to him, but he was really nice.

Ever since then, comics became a weekly habit for me. The comic books I read back then are long gone now -- I read them so much their covers disintegrated. They totally fell apart. 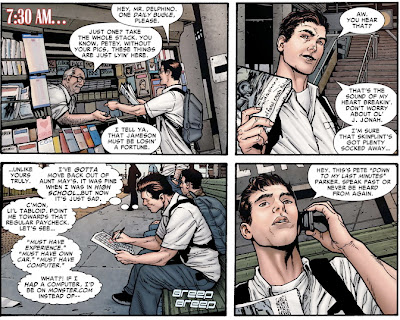 OS: So how does it feel now that you're actually writing the character?

SLOTT: It's still unreal to me. I know the book exists, I've held the pre-production copies in my hands...but there's still that disconnect. I'm just so close to the Dream, you know?

OS: Okay Dan, speak to my blog readers directly and tell them why they should pick up "Brand New Day." Talk to them fan-to-fan, like you were in a comic book store with them.

SLOTT: I would ask them to shake their inner Etch-A-Sketch and just give the book a chance. Imagine the art team that brought you Civil War -- Steve McNiven, Dexter Vines, and Morry Hollowell -- finally reunited. And the happy idiot who brought you Spiderman & Human Torch, She-Hulk, and Avengers Initiative on board on writing chores as well.

SLOTT: Well, that original FCBD comic actually gave away a little too much of the original "One More Day"/"Brand New Day" storyline -- and had to be edited. But on January 30th, the Director's Cut of "Swing Shift" will come out -- fully restored with the original script.

Now, if you're really interested in Jackpot, you should read Mark Guggenheim's three-part arc in February. A lot is revealed...and questions are answered and raised.

OS: How do these arcs work exactly, in terms of who gets to work on what?

SLOTT: Each creative team gets a turn each month -- one arc per month. So we all get to shine.

OS: Where did "Wheatcakes" come from? I'm referring to the line Peter gives in the first issue of "Brand New Day" to Aunt May: "What, no wheatcakes?" 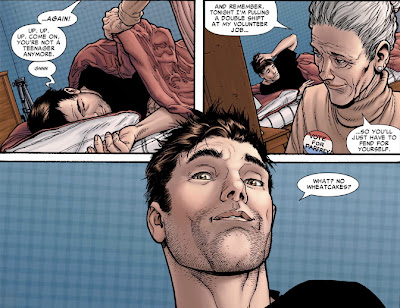 Now what I think is interesting about that issue is that Uncle Ben has only like two lines -- and yet he's probably one of the most important characters in the Spider-Man mythos. Ben's like the Obi Wan Kenobi of the Spider-Man universe. We -- and Peter --only know him for a short time, but he's really important. 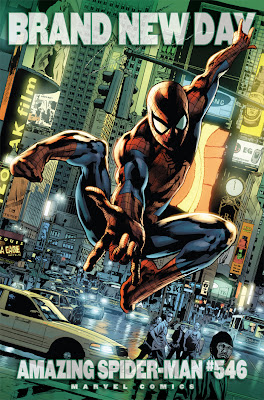 OS: What's the coolest thing about working on Amazing Spider-Man for you?

SLOTT: Seeing all of the art as it comes in. Never in my life have I seen such a Murderer's Row of artists stroll right in from the Wizard Top Ten. It's very exciting.

OS: Now, you have a couple of appearances coming up in New York, right?

Then on Tuesday January 15th at the Comic Book Club live weekly talk show is going to have a Amazing Spider-Man "Brand New Day" event with all four writers: Bob Gale, Marc Guggenheim, Dan Slott and Zeb Wells. Plus ASM Editor Steve Wacker! This will be held at The People's Improv Theater on 154 West 29th Street, 2nd Floor, and admission is $5:00.

OS: Well Dan, I've been following your comic career just about from from its beginning -- Marvel, Acclaim, DC, and now full-circle with Spider-Man. I'm proud of you & I wish you the best of success.
Posted by Verge at 2:00 PM