Will Nick Fury Be Replaced By Ultimate Nick Fury? 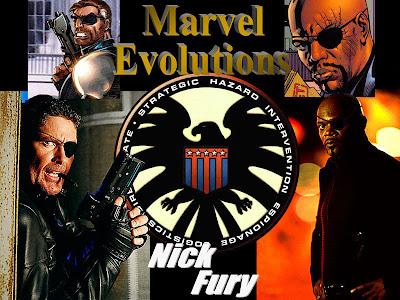 image found as a wallpaper on Superhero Universe
This one has been on my mind for a while, and I base it on nothing but the Ultimate version of Nick Fury's (or, as he's known, "Samuel L. Jackson") appearance in the Marvel movies and now toys.

First, Samuel L. Jackson plays Nick Fury in the upcoming Iron Man movie. Then, I heard that he's making an appearance in the new Incredible Hulk movie as well. While the universe in those films is not the explicit Ultimate universe, the choice of Jackson seems to denote an Ultimate version Fury (a character that was designed to look like the actor).

To be fair, there are a number of figures in that kid's toy line that are Ultimized, such as Giant Man.

But, I do wonder if one day the popular Ultimates Nick Fury will "replace" in some form the Marvel Universe Fury -- if only to have the comics fit more with the movies.

Would hardcore Fury fans balk at this?

I wouldn't mind the change; I'm fine with the Ultimates Fury. But, I am not a hardcore Nick Fury fan.
Posted by Verge at 1:00 PM