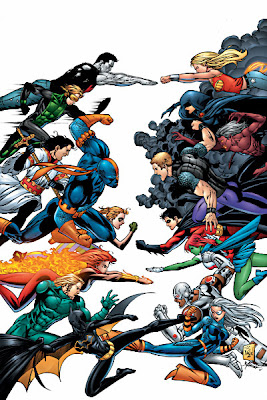 Official answer: "To tell the truth, I wanted the chance to get back into the business of editing and sharpen up the skills..."

2. If the book sells poorly, does he have to fire himself?

3. If the book does well, can he give himself a bonus?

4. NRAMA: To be about as…blunt as possible, this isn’t a “figurehead” thing for you? That is, you’re scheduling the art, trafficking the pages, shaping the stories with Sean? You’re doing all the editor things for the book?

I picture Dan at the Xerox machine, collating pages:

"Does anybody know what that blinking light means?! The copying just stopped..."

"Try to knead out the paper from the metal teeth with some sort of long implement."

5. What is this obsession with campy supervillains? First Captain Boomerang in Identity Crisis, then Pied Piper & Trickster in Countdown, now Clock King in Teen Titans. Is Sportsmaster still available?

Bottom Line: I don't think DiDio would edit this book if it didn't have some high-impact stuff in it that would effect Final Crisis/DCU status quo. Sean McKeever is a very talented writer but I hope he is given the breathing room to really make this book his own (which has, in my opinion, not been the case so far in "Titans" but has in "Birds of Prey"). And I am pleading for some artistic stability on this title, and the doing-away with a new penciller every other issue; that sort of inconsistency alienates fans.