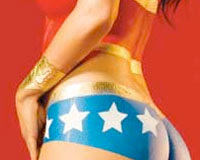 Not surprised by the cover to the February issue of Playboy (NSFW link) making the rounds on the Internet, showing a naked model with the Wonder Woman costume painted on to her flesh.

Some comments on the story on the blog Jezebel caught my attention:

"If female comic book heroes weren't regularly dressed like whores, I'd be more upset. Since they are, this is merely a logical extension of that, sorry to say."

"Also, funnily enough, her costume in that picture is waaaaay closer to the way Wonder Woman looks in the comic books than anyone with an actual costume ever gets."

"Did they at least keep it authentically Wonder Woman and do a whole lesbian bondage themed spread?"

"Again, I think one of the points that folks are missing is that Wonder Woman hasn't been a feminist superhero for years (possibly not since her creation). She already IS a character designed for male consumption; Playboy hasn't appropriated anything."

There were also a number of female commenters who bemoaned the fact that this sullied their memories of their Wonder Woman underoos as a kid.

As for me, like I said, I wasn't surprised by the Playboy thing. It was a cheap shot by the magazine, to be sure. But I would be far more outraged if this happened to Batgirl or Supergirl. To me, Batgirl was always the true feminist superheroine -- smart, independent, and under-sexualized. Supergirl was the virginal innocent -- originally portrayed as your own kid sister or cousin.

But, Wonder Woman was created by a dude with really strong and weird opinions about women & sex -- he referred to women's vaginas as their "love parts" -- and all that baggage couldn't help but taint that character. Adventurous, resourceful Batgirl is the superheroine I wanted to be. Wonder Woman was half-naked. Now, in Playboy, she's all naked. Look at the proportions and pose of that Playboy cover and compare it to that of a Terry Dodson Wonder Woman cover -- outside of the nipples, how do these images differ? 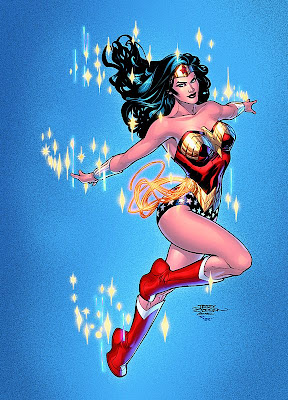 My God, if anything, the oft-reviled Adam Hughes covers actually portray a Wonder Woman far "deeper" than the Dodson covers: 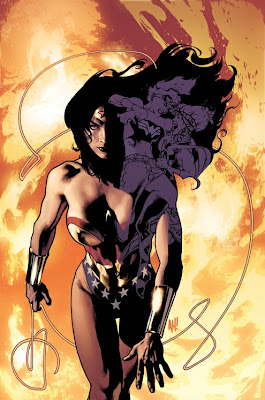