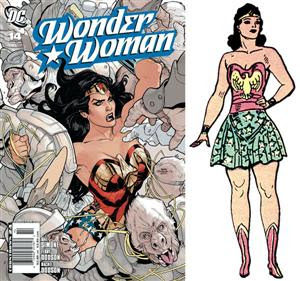 If the point of this recent article in Newsweek on "Wonder Woman" & women in comics was to reassure me about the current place of females both in terms of readership & within the mainstream comics industry, it didn't do a particularly great job. Consider me underwhelmed.

If most of DC's readers are indeed "college-aged men who are looking for high adventure," part of that is a lack of out-of-the-box thinking & laziness. Women and girls enjoy tales of adventure as well. You can't make a comic book that appeals to a girl who likes "Pirates of the Caribbean," "Harry Potter," "Firefly," and your own "Smallville?" Then you've failed. There are hundreds of thousands of females out there that are rabid fans of this adventure/fantasy stuff in other media or in manga. I refuse to believe that the superhero genre by itself only attracts male fans. It's the presentation, the characters, and the story.

And the title of the article: "Holy Hot Flash, Batman!" Wow. Just wow.

And thank God the article writer insists that that we do't have to "worry" about there being a "feminist agenda" in the latest Gail Simone-penned "Wonder Woman," or having WW's sexiness "taken away." I mean, that's the most important issue in all of this:

"In other words, that bustier is here to stay," the article's author writes as her last sentence, summing it all up for us.

Well thank God for that. That was exactly what I was worrying about.

I don't fault Gail Simone for this at all; I just don't like the way the article was shaped by Newsweek's writer. It's an article supposedly written about women's growing empowerment in comics and ends up completely undermining it. The article begins and ends about WW's underwear.
Posted by Verge at 10:02 AM