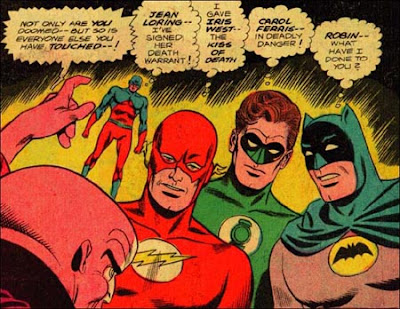 Occupation: I work in advertising, we are the machine, buy our clients' shit (Nokia cell phones are awesome, no seriously, buy lots of them while drinking your Sierra Mist Cranberry Splash, it's a wonderfully delicious beverage sent down to earth by magic, get some today before its too late!)

Comics you read: welllll..... I could just say everything Marvel and DC and Vertigo, OOOORRRRRR I could list every title I read (and it says read not enjoy) sooo...

Astonishing X-men, Uncanny X-men, X-men (can I say Mike Carey has made X-men one of the best superhero comics out right now? I just did.), New X-men, Wolverine, Wolverine: Origins (like I said read, not enjoy), X-Factor, and other X-titles I am forgetting... oh yeah the crap that Claremont puts out... god I feel like cutting every time I read it to actually feel something other than boredom

Fave writer: Really hard one for me... Brian K Vaughan and Geoff Johns and Mark Millar all rotate on that one, oh and I love me some Neil Gaiman and Mike Carey and Joss Whedon.

Fave character: Conner Kent, Superboy, named my doggy after him

First comic you ever read: X-men when I was 4 years old

Your favorite comic book "memory": (either related to comics or actually in a comic) Probably has to be the Cannonball vs Gladiator Christmas time issue of Uncanny X-men. That and the end of Age of Apocalypse: Omega where Magneto rips Pocsy in half. And Onslaught vs Marvel U.

Most frustrating comic book "moment": Spiderman One More Day. I have never hated a comic story more, nor will I ever. I know that sounds crazy but it's true, I am extremely disappointed in Marvel. 2nd would be Conner Kent dying and not coming back.

Where/how do you buy your comics?: Zeus Comics and Toys in Dallas, Texas, gay owned and operated and wonderful and awesome. (Friends of Lulu always comes to CAPE there, so you'll be expected this year.)

Floppies or trades?: both, depends on the title, generally read Vertigo/Indie stuffs in trade, and superhero stuffs in floppy.

Personal motto: You don't have to accept anything cause there is nothing to accept, I just am

How did you start reading "Occasional Superheroine?": Randomly one day clicked a link by accident, loves it
Posted by Verge at 5:06 PM