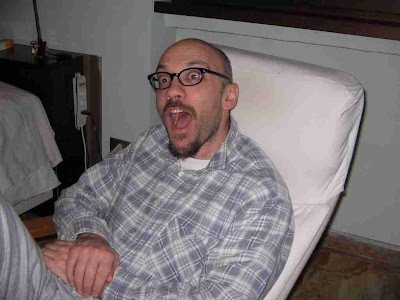 Comics you read: Almost everything by Marvel, a lot of DC and some Image & indies. All in Italian version except for Showcase presents & Essentials. (I used to read original editions way back during mid 80’s to 1990)

Fave writer: An outsider here, Will Pfeifer for his H.E.R.O. and Catwoman. I’ve still got to read Amazons Attack, not sure I will anyway but let’s think that he has to pay bills somehow…I'm curious about his "Sub Diego" Aquaman stories which will be published here shortly.

Fave character: A close match between Howard the Duck and Spiderman for Marvel, Flash for DC ( it’s too bad here in Italy we only had a glimpse of his adventures after the end of the Waid run which didn’t comprehend the Johns run and the “OYL” issues were really awful). I really liked the kid from the Street Angel trade.

First comic you ever read: Tough guess…. I’ve been reading comics since forever, must have been a Disney comic. I remember my first superhero comic better, the Amazing issues when Pete was sick with an ulcer and had to use an exoskeleton and a fake spidey mask without lens. For a ten year old kid used to classic adventure/funny stories this was really something else, super-melodrama!

Your favorite comic book "memory": (either related to comics or actually in a comic) Going with my niece to a comic book convention…it was her first time and although it was a small and not so special show her enthusiasm was really fantastic and made it unique for me! Parents bring your kids to comics conventions, it’s a great way for them to learn how to choose and stay in budget limits and it’s tons & tons of fun (even if you will not be able to attend the neverending 1km waiting line for an autograph of your favourite artist…)

Most frustrating comic book "moment": A balloon in the old Invaders series had the Torch saying: “this is how you fight a war, hating !”(the enemy). That was in the Italian edition at least and I found it really disturbing

Where/how do you buy your comics?: Comic shops, a little one near where I live for weekly shopping or sometimes the bigger ones in Milan for titles harder to find. No internet shopping for me, I prefer the thrill of the hunt, spending time travelling & finding my comics.

Floppies or trades?: There are few Italian editions that have both so there’s not really a choice. If I had a choice it would be floppies for a few favourites (the ones I follow “no matter what”) and trades for title I follow occasionally. It’s too easy to praise trades ‘cause that’s the target format for comics these days but for Me, I still like the floppies…

Marvel or DC?: Marvel, I like the humanity of their characters and although both exceed in sensationalism lately, they seem to have more sense in their approach than DC.

Personal motto: “It’s not pessimism, it’s realism” but I really have to find a new one in 2008!

How did you start reading "Occasional Superheroine?": I read about it in another net column (Lying in the Gutters) and since “Goodbye to Comics” I’ve been a regular reader.
I think your point of view on the actual comics scene is one of the most intriguing thanks to the unique combination of professionality, passion and knowledge
Posted by Verge at 7:20 PM