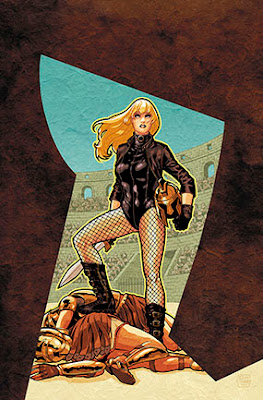 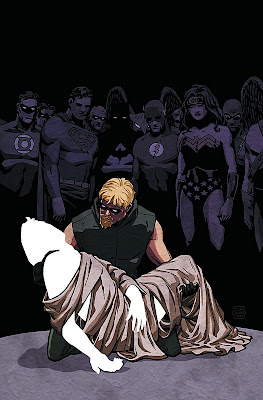 Pro: Cliff Chiang's art is gorgeous. Utterly gorgeous. There will never be another Alex Toth, but if anybody today is close to picking up the legacy, it's Chiang.

Pro: But at least the story moves and keeps my interest, which certainly can't be said for every book on the stands. I realize the rating I gave the writing might seem rather high for some, but it's the comics with stories that don't move -- which frustrate and bore me with its ponderousness and molasses-speed storytelling -- which are the worst books.

Con: This series has the unenviable task of picking up from both the "Wedding" storyline and Amazons Attack -- and actually (attempting to) connect those two tales together.

Pro: Cliff Chiang's art is really great. I mean, it's that good that even if you didn't like Winick's writing it still would be worth picking up. (I call such comics that you only pick up for the art "portfolio books")

Con: It's the little touches: So that Everyman guy who was Ollie's impostor and BC's husband-to-be tried to kill her on their honeymoon bed because he had erectile dysfunction disorder?

Bottom line: Winick is much better with/seems to be suited for soap-opera, emotional-type writing than strong plot-driven writing. He is not the best person to be entrusted with figuring out how to resolve tricky continuity points, because he just might throw erectile dysfunction disorder in there out of desperation.

That said, the art in this book in stunningly beautiful. It really is some of the best art being produced now for mainstream superhero comics. I really wish somebody would put Chiang on JLA.

So the choice is up to you.

PS: Totally forgot to mention Connor's "brain death." I have been so burned by the recent spate of apparently kiling off/bringing back superheroes lately that I just don't care. This note has been played out so often, it has no more emotional resonance to me.

Bet you $5 he gets "brought back" as either a possessed super-ninja or with the ghost of some other dead superhero, though.
Posted by Verge at 3:00 PM