A (Comic) Bookstore Grows In Brooklyn 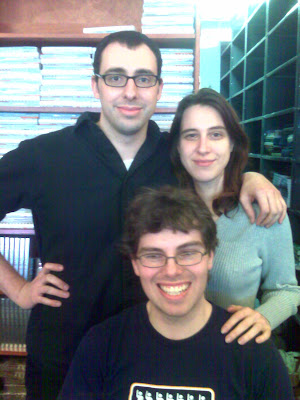 From the "It's A Small World After All" Department --

So me and the BF are slumming on a strangely summery (read: global warming, we all gonna die) Tuesday afternoon. Eating Burger King -- you know, the "BK."

BF says: "Hey, there's a DC Comics poster hanging in the bookstore across the street."

So we decide to go to the shop, a branch of "Shakespeare & Co" near Brooklyn College, and check it out.

The guy at the front counter looks familiar...

He's actually helped develop a nice little niche of graphic novels within the store, and it seems to be doing well (it grew from just one shelf to the whole section). There are also key authors like Alan Moore cross-referenced within the literature section. And professors at the nearby college occasionally order comic titles from the store to teach for their classes.

In an area in which the nearest comic store is usually several subway stops away (grumble grumble), the Shakespeare & Co on Hillel is a nice little oasis for current & classic trade paperbacks & graphic novels.

And also -- I got to meet Mordicai! And Pete!

And I got a pair of used Spider-Girl trade paperbacks! How cool is that?
Posted by Verge at 4:30 PM