Should Superheroine Comics Have Sexy Covers? 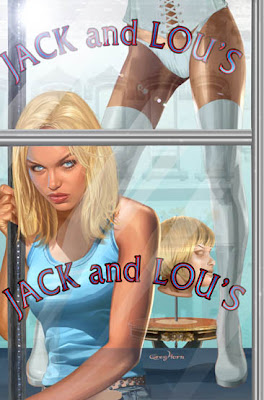 I know, I know...we've only tread over this issue five billion times before. but Lisa Fortuner's post about talking to a female shop clerk about Greg Horn covers sort of brought it all back. So bear with me.

At issue is the question of whether comic books featuring superherones should have sexy covers.

And on that topic I'm thinking specifically of Adam Hughes on Catwoman, Terry Dodson on Wonder Woman, and Greg Horn on Ms. Marvel & She-Hulk. 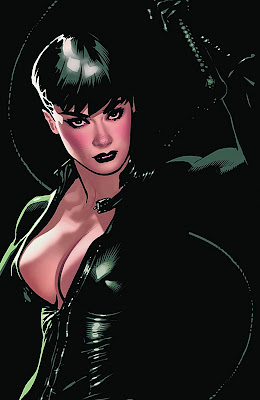 Point One: Is Greg Horn a bad artist?

No, Greg Horn is not a bad artist. He paints photo-realistic covers much in the same vein as Joe Jusko, the Hildebrandts, Frank Frazetta, and just about every other classic Sci-Fi, Adventure, and Romance paperback cover artist.

This style, while possessing a mass appeal, is not universally embraced by the more high-brow comic aficionado (with Frazetta being the possible exception). In this rejection of the photo-realistic style I see the same rejection art critics have had for "classic" realistic art versus more abstract modernist works.

Ergo, "Paul Pope is a better artist than Greg Horn."

"Pope's work is unique and fraught with deep meaning and Horn's is nothing but commercial lifeless shill."

I think some of Horn's more absurdist covers for She-Hulk & Ms. Marvel are actually quite good. For example, the "Awesome Andy" cover for She-Hulk #14. The combination of Horn's hyper-realistic style and the absolute absurdity of the cover subject matter creates a surreal, humorous effect. 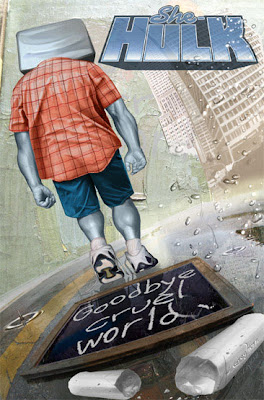 I would also point to "American Gothic" cover parody for She-Hulk #12 that Lisa referenced in her Newsarama blog. I don't buy the argument of the shop clerk that the cover is ruined because Horn didn't paint She-Hulk exactly as plain as the woman in the original painting. Again, the contrast between Horn's photo-realistic style & the absurdity of the subject matter works for me. 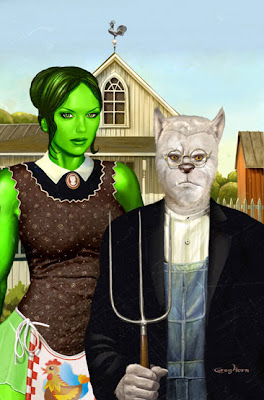 However, Greg Horn is generally not hired to paint quirky absurdist covers. He is hired mostly to paint covers that, to a large extent, do fall under the rubric of "cheesecake."

Rather than savage him as an artist, it might be more helpful to examine why there is a need/market for these covers in the first place.

It is true: look at past and present runs of superheroine-centered books like She-Hulk, Wonder Woman, Elektra, Catwoman, Ms. Marvel, Supergirl, Emma Frost, and others, and there is a clear pattern of cheesecakey covers. (I'm not even figuring books like Lara Croft, Witchblade, Vampirella, and others of that type into the equation, since it seems like a forgone conclusion in these books that cheesecake will be a large part of the story.)

Do comic book publishers feel a need to put cheesecakey covers on their superheroine books because they're afraid that not enough men will buy them if they don't?

Do these publishers feel that they can't count on enough female readers to pick up comics about female characters -- and so they increase the odds of getting good sales by at least making the covers appealing to their biggest demographic?

Honestly? I think in some cases this is absolutely true.

But are these covers at the same time chasing away the very same female readers that publishers complain do not support the books?

She-Hulk has a new cover artist, Mike Deodato, as of issue #22. While his She-Hulk is undoubtedly beautiful & buxom, the main accent of these covers seems to be much more about Shulkie's strength and fighting ability than sex. 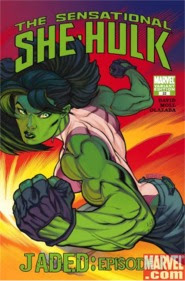 If you are a woman and are too embarrassed to read a She-Hulk trade or an issue of Catwoman because of the cover, what can you do?

You can give your opinions online. You can write polite e-mails & letters to Marvel & DC explaining your point of view.

But you can also bear in mind the Catch 22 in all this:

If you do not support these superheroine-centered comics because of the covers, and are not counted as readers, it only fuels the editorial belief that there are not enough female interest in these comics. And when the editor feels that there will not be enough female interest to keep this female-centered superhero comic afloat, turning to gimmicky cheesecake covers in order to stir up more male readership may happen (or outright cancellation).
Posted by Verge at 9:24 AM