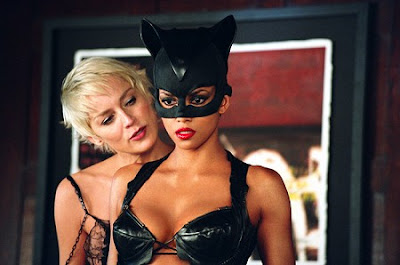 This is in response to the continuing "WB no like the wimmins" movie clusterf**k, and word that a "Wonder Woman" solo movie most likely will never happen.

Really, if as a producer you f**k up cool concepts like "Catwoman" and "Wonder Woman" and can't make a decent film out of them, you are a moron.

Why did it fail? Because women leads make bad action films?

No, because the producers didn't trust the original source material and decided to rewrite the character from scratch.

Even inside DC at the time we were baffled why the WB felt the need to completely change this character -- her name, her origin, her powers, everything.

If anything, the WB seemed more concerned with making the licensing "bible" for the character than creating a memorable film character. I remember walking into a conference room at the end of a marketing meeting and there were swatches of fabrics and wrapping paper and all this "Catwoman" licensing design stuff everywhere. And it was all foo-foo, all precious Barbie-level purple-and-pink pussycats and diamonds and s**t.

You know those T-shirts that play to the Paris Hilton wannabe crowd and have sayings like "hot materialist sexy bitch" on it with a graphic of a pampered chihuahua on it in a bubble bath? That's the level of design and sentiment we're talking about here. That's what the WB apparently got out of "Catwoman" the concept.

Well, no wonder the movie bombed! And it had Sharon Stone as the villain! WTF???

Fan-movies have been done better than that damn film!

And so what now, since "Catwoman" was screwed up it sets the precedent for no superheroine movies?

Even that corny-ass TV show in the 70s made lots of money.

Meanwhile, we have a character like "Alice" from "Resident Evil" starring in three moderately-successful action films. And Alice is a cypher compared to Wonder Woman.

Why does Sony "get it" and the WB doesn't?

Obligatory: (pay attention to where Halle "thanks" Warner Brothers)