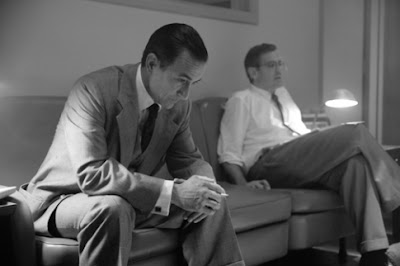 There has been a debate recently in the blogosphere regarding comic book journalism -- what is it, is there enough of it, or does it really exist at all?

The usual suspects are dragged out for examination: Wizard, Newsarama, Lying in the Gutters, etc. "Are they really comics news?" "Do they really ask the hard questions?" Etc.

Dick Hyacinth's post "Journalism and the future of Newsarama" encapsulates the debate nicely.

Here are some thoughts on the subject:

I think a big problem is that this industry is way too small to burn bridges in.

Because this industry is way too small.

I see the same buds at every convention, every party. A lot of people know each other. And I write on this blog maybe 10% of what I hear. Because they're friends and associates.

But maybe the best critics and investigative reporters have to come from outside the world from which they report.

Take "Siskel and Ebert." I think part of their appeal -- why they were so trusted as authorities on movies -- was because they seemed so utterly outside Hollywood (though Ebert had a screenwriting career before becoming a movie reviewer).

There are exceptions in the comic book world, however.

Heidi MacDonald's Beat is consistently daring, frank and balanced in its handling of comic-related issues, and she is not an comics "outsider."

Some people have questioned whether Rich Johnston had gone soft regarding a positive piece he did on Dan Didio this summer. But if Johnston truly wanted to be a suck-up to DC, he wouldn't be posting any of the items he posts -- like this week's column on "Countdown" -- because DC hates any non-authorized news.

Still, do we have a comic book journalist at the moment of the (relative) level of Murrow in "Good Night and Good Luck?"

No. I mean, Comics Journal occasionally will have some really good pieces. But no.

Reason One: They would need to get paid accordingly. Real investigative journalism takes real time and sweat and labor. You might be able to do that on your own for your blog every once in a while, but not on a regular basis.

Reason Two: They would need to have nothing to lose regarding the burning of bridges.

A Reason Three that's bandied about a bit is the lack of access by the publishers themselves. I disagree on this point. I think for those who have the inclination to do so, you can get very far in investigating one comics-related thing or another without the official cooperation of the company itself.

Take DC for example. DC has a very efficient -- some might say Stalin-era -- embargo on information they want to keep private.

But within that structure are numerous tendrils of exasperated peoples who are just looking to vent.

DC is not unique in this, it's pretty much the structure of every corporate organization.

But in order for the aspiring "real" investigative reporter to do this expose, they have to understand that they will never ever ever (ever) ever get work at DC. (ever.) (well, maybe until the next internal "housecleaning" -- but that could take years)

And if you're the online media outlet hosting the story, your relationship with DC will also become strained.

Can either the reporter or his/her employer survive this story? Will it be worth it? Will they be invited to the parties anymore?

The great thing about The Comics Journal is that their answer would be somewhere along the lines of "who the f**k cares about the party?"

But for most comic book news media outlets, I think the answer would be "let me think about it."

This brings to mind a related situation.

I had chatted with a smaller "entity" some months back about possibly adapting my "Goodbye To Comics" in graphic novel form. In our first meeting, they were extremely enthusiastic. In fact, when I demurred on the idea, they gave me some gentle prodding and insisted I pursue it. But by the second meeting, a month later, the conversation went something like this:

Them: We were thinking about it...and, well, we just don't think this story would really be of interest to readers. It's not compelling. And this has nothing to do with us being scared of DC or Paul Levitz. <-----quote!

Me: Well...okay. I guess...maybe it worked better with the blog because of the medium? Because it did get quite a number of hits. What exactly about the story is not compelling?

Them: It's just...it's just not a story that people would be interested in reading. Besides...everybody will know who the people are, even if you change the names.

Me: But you just wrote to me the other day that you wanted that realism. That the last treatment I gave you was too fictional, too watered-down.

Me: Maybe I need to do it as a webcomic or something? Is it the medium?

Them: It's just not a story people would be interested in reading.

The rest of the conversation concerned a subtle dissuasion from even pursuing it personally as a webcomic, and the reassurance that I was really a very talented writer and should write manga for teens instead. I s**t you not.

Why the sudden turnaround?

And this is the sort of environment in which hard-hitting, controversial comics journalism must flourish.

In that environment, I think $$$ for the reporter who has to deal with this s**t is at least the very first order of business.
Posted by Verge at 11:37 AM