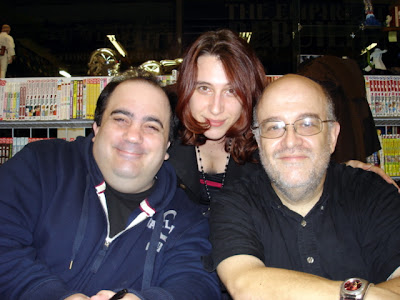 What a day yesterday! First, I go to my local comic book store to pick up my weekly comics. The new Peter David "She-Hulk" is totally sold out except for one copy in a bag and board for $15.00.

So then I hop across town to attend the Dan Slott/Peter David signing at Jim Hanley's Universe. The signing is significant in that it's basically Slott "handing over the keys to the kingdom" to David on "She-Hulk." The place is mobbed and, much as I suspected, there was a surplus of extra "She-Hulk" in stock.

On my way to the signing line, I run into "Reagan: A Graphic Biography" writer Andy Helfer. I used to work w/Andy at DC, and we were yakking it up. Then I caught Dan Slott's eye and we were waving to each other across the store.

I also worked with Slott at DC, specifically on a book called "Arkham Asylum: Living Hell." I always considered "Living Hell" a significant Dan Slott comic because I think it was the first to really bridge that gap between his prolific work on stuff like "Looney Tunes" and "Batman Adventures" and the more adult/mainstream work he does for Marvel, like "Avengers: The Initiative" and, coming soon, "Amazing Spider-Man."

I grab an issue of "She Hulk" and jump on the signing line. The guy ahead of me has what looks like a professional "kit" filled with toys, comics, and other memorabilia to sign. He is holding a "Sandman" Mego-like doll in his hand.

"No, this came out earlier."

Is he really going to have Slott/David sign all of this, I wonder. But he was gracious and let me cut ahead of him on the line.

Chatted with Slott & David. David said he had read my blog, which was flattering.

David said, "Dan Slott says that my new run will be Shulkarific -- and I couldn't agree more."

I took a picture with the two and left the table. I realized that in all our yakking, I never did get that issue of "She-Hulk" signed by Peter David. So I just grabbed one off the "impulse rack" and just bought it.

Next, I had to visit the ER with my BF because he hurt a tooth. It wasn't serious, but it needed to be addressed that night if possible. Then I ran all the way across town again for this women-in-comics meetup. I had an awesome time, and met many talented people. My BF met up with me there, and then we headed out...

And now comes out "Soho Surprise." (did I mention yesterday was a full moon?)

We took a wrong turn somewhere around Albuquerque and ended up in the ass-end of Soho. I mean, we didn't know WHERE the hell we were. No subway trains. Every person we ran into gave us different directions. We used a skyscraper as a landmark, incorrectly thinking it was the Empire State Building. It was actually something in the opposite direction. Or across the water.

We were walking for an hour-and-a-half. It was like something out of the Blair Witch Project.

Finally we made it home. A valiant attempt was made to read our comics, but we soon passed out. Snore.

On a different note -- I have a rather biggish thing relating to me and comics that I've been keeping from y'all for the last several weeks. I'm so excited about it that I'm just about to have kittens. The official announcement will happen in a few days, but I'm just giving you a heads-up.

News at eleven. Have an awesome weekend, all!
Posted by Verge at 12:22 PM