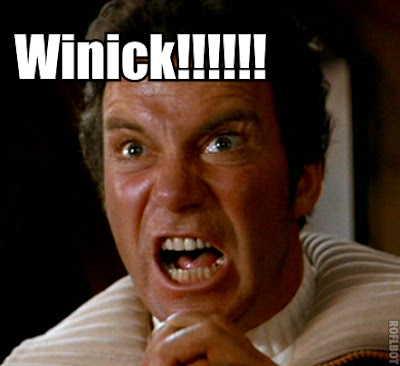 So we've got another death (or whatever passes for it) on the horizon for the Green Arrow Family: 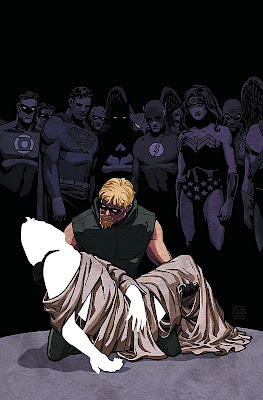 I think Mia is the most refrigable. She's a) redundant. b) a female (always a liability). c) is HIV positive. and d) Winick has already admitted an interest in killing off a Black Canary.

That said, killing off Mia would be awful writing because it would be soooooooo predictable.

"Oh, her HIV turned into full-blown AIDS and she died! Look, my book is soooo relevant!"

It would be far more interesting to have Dinah die and have Mia, who is living with HIV, be the new Black Canary.

I mean, if Magic Johnson can live this long w/a drug regimen, certainly Mia can, at least for a while, continue to fight crime as B.C.

Now, I've heard it said that the dead person on the cover cannot be female because the breasts are not prominent.

However, the artist, Cliff Chiang, is not known for drawing tits like missiles. He is far more subtle. So that could be a male or female.

Now, either Connor, Roy, or both are in the crowd watching Ollie.

See, here is why I think the dead person is Roy Harper:

1) It would give a reason for the JLA to be there. Because he's on the current roster.
2) If Didio thinks Nightwing is redundant, what in the world does he think of "Red Arrow"? I mean c'mon really?
3) DC needs every ethnically diverse character they can get. So in my opinion, Connor stays. Connor is also a far more visually and thematically unique character than Roy.
4) This cover reminds me of that old Green Arrow/Green Lantern issue where Roy is on the smack. G.A. has that same sort of tenderness towards the figure on the cover, like he knows the person very well.
5) Roy Harper has plenty of enemies.
6) The best use of Roy Harper I've ever seen are the hundreds of slash Arsenal/Nightwing fan-fics:

"I get gutsy when I'm drunk." I said, and then drained the last of the Guinness. " And I'll need a lot of courage to...." I paused and took a deep breath to gather my nerve.

"To?" Dick prompted, leaning forward ever so slightly. Into my personal space.

"C'mon." I grabbed Dick’s arm and dragged him across the room and out the door. I pulled him into a nearby alley. I glanced around, making sure we were alone. I swallowed nervously and looked at Dick.

Dick looked back at me, obviously unwilling to make the first move. "I got it this far, Roy. Make a move."

I chuckled nervously. "You're a broken record Robbie."

Dick smirked and replied, "It's a training technique. Drill it into your head and you might obey. Make a move Roy."

My stomach was all butterflies, my nerves jumping. I reached my hand out tentatively and slid it gently up Dick’s neck, my fingers tingling. My hands tangled in his thick black hair and I pulled him closer to me. I closed my eyes and kissed him softly on the lips. My heart jumped, my stomach danced. My head went light and I knew that this was it. This was what I wanted.

Dick responded in kind. I pulled my lips slightly away from his. "Make a move Dick," I said huskily.

Outside of fic, I find Roy a little boring. Yes, he fell in love with a villainess. He was on the smack. He gets shot and beaten up a lot. But Connor is still, in my estimation, far more intriguing. And, unlike the real Roy, Connor has some "bi" subtext going on (DC officially denies this, but even a lot of us at the company way back when assumed he was) and that just textures his character even more.

So my money is on Red Arrow biting the dust.

That said, if it turns out to be Mia either dying of AIDS or some supervillain slapping the shit out of her, I'm going to roll my eyes.