More on Rucka, Montoya, and Gay Characters in Comics 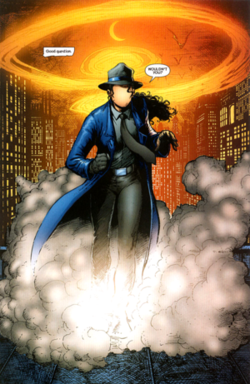 Eric Newsom's excellent Question site is hosting a multi-part in-depth interview with writer Greg Rucka. In the latest installment, Eric took the time to as Greg about statements I made regarding the lack of open gay male romance/sexual scenes in mainstream comics on the level of what he was doing with Renee Montoya.

"You know, aside from the question of whether this level of nudity and sex is appropriate for a non-’mature readers’ book, I wouldn’t mind it — if gay male characters in mainstream comics were afforded the same level of frankness and depiction of sensuality."

"No, I think it’s a very fair, and very valid point. The fact is, lesbianism is considered more commercially palatable. Having gay male couples seen “coupling” is a much harder sell. I’m not sure it’s something I would argue with, frankly."

"Look, I think comics need to be more representative across the board. I think we need to see more ethnicity, more diversity, more cultural differences. The way we do that is by forging ahead, and taking the small victories where we can. There are people who think this “agenda” is a bad thing. I don’t. Literature is supposed to reflect our world, even if it’s literature that deals with men from Krypton or small furry blue creatures from Alpha Centauri."

"Do you remember what the initial reaction was, both from editorial and the readership, on Montoya’s forced coming out?"

"Yeah. [In editorial] there was almost none. They only cared that the story was done well. There was no resistance at all to revealing that Montoya was a lesbian. Or to showing Montoya kissing Daria. I’m sure, in large part, it was because we were doing it in a book that was selling, charitably, 25K an issue, and we were outing a character that was barely on Burbank’s radar, if at all. But there was no difficulty in getting any of those issues approved."

Actually, when Burbank found out, things did get a little tense for a while in the offices. At issue was that Renee was technically considered a "WB cartoons" character -- much like Harley Quinn was. There was the issue of a character from the cartoon being gay. And there was the issue of the WB not initially being in on the "loop" regarding this character's development.

So you had this couple of days in the office where that old familar dread of "ohhhhh, there was a f**k-up, I wonder if somebody's gettin' fired" in relation to that "Gotham Central" issue where she comes out. But in the end, DC upper management stood by editorial. If they had not, somebody probably would have gotten fired. They've gotten fired for less.

Anyway, the interview in its entirety makes for excellent reading, and was a pretty excellent achievement on Eric's part.
Posted by Verge at 12:41 PM

Email ThisBlogThis!Share to TwitterShare to FacebookShare to Pinterest
Labels: homosexuality in comics, the question